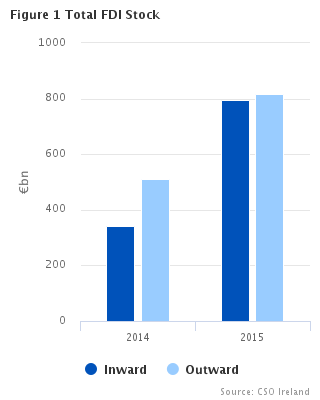 During 2015 direct investment flows abroad increased by €119bn to €150bn from €31bn in 2014. Investment into the US of €63bn and into Europe of €71bn (mainly to Luxembourg €56bn) accounted for most of the total investment. The increased flows abroad consisted mainly of Equity investment (€113bn) while reinvested earnings and other capital amounted to €11bn and €26bn respectively - see Table 1.

The largest sector for inward investment was the services sector which at the end of 2015 held positions of €453bn, a result of increased investment in financial intermediation and other services activities, up €67bn and €90bn to €185 and €119bn respectively. Investment in the manufacturing sector increased by €263bn to €341bn in the same period - see Table 8.

The Foreign Direct Investment release updates the annual statistical series on Foreign Direct Investment (FDI) flows and end-year stocks (or positions) for Ireland, broken down geographically by region and by country.  The release includes tables with further analyses of the FDI flows and stocks presented by the principal economic activity (using NACE Rev.2 classification) of the resident direct investment enterprise.  The statistics are methodologically consistent with the data already presented in the quarterly balance of payments and IIP releases.  The statistics are also compatible with those supplied to Eurostat and the European Central Bank (ECB) and to other international organisations such as the International Monetary Fund (IMF) and the Organisation for Economic Co-operation and Development (OECD).

Redomiciled PLCs in the Irish Balance of Payments

Scan the QR code below to view this release online or go to
http://www.cso.ie/en/releasesandpublications/er/fdi/foreigndirectinvestmentannual2015/