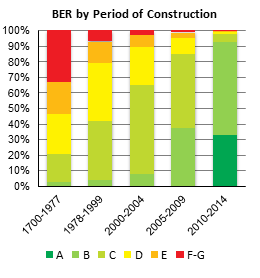 105,539 dwellings had a Building Energy Rating (BER) audit conducted in 2014, the highest annual total since the rating scheme was introduced. This brought the total number of BER audits up to 544,621 conducted between January 2009 and December 2014 (see Table 1). The energy audits show that considerable changes have occurred in the characteristics of recently built housing stock and that the type and age of dwelling are the key determinants of energy efficiency.

A Building Energy Rating (BER) is an indication of the energy performance of a dwelling (represented in units of kWh/m2/annum). Actual energy performance will depend on how the occupants operate the dwelling. A BER is based on the characteristics of major components of the dwelling including: wall, roof and floor dimensions; window and door sizes and orientations, as well as the construction type and insulation, ventilation and air tightness features; the system for heat supply (including renewable energy), distribution, and control; and the type of lighting. The BER certificate indicates the annual primary energy usage and carbon dioxide emissions associated with the provision of space heating, water heating, ventilation, lighting, and associated pumps and fans. The energy use is calculated on the basis of a notional family with a standard pattern of occupancy - hence data in this release giving average primary energy use or carbon dioxide emissions are not based on actual data. A BER only covers electricity used for heating, lighting and ventilation with associated pumps and fans. Electricity used for cooking, refrigeration, laundry and other appliance use are not included.

The figures will be updated on a quarterly basis. While the changes to previous quarters will mainly relate to the most recent quarter, previous periods are also subject to revision.

BERs are conducted for around 90,000 domestic dwellings each year (2009-2014). Hence there were 512,000 unique domestic BERs (one per dwelling) completed in the period 2009 to the end of December 2014. This compares with around 1.66 million private households enumerated in the 2011 Census of Population. The 2011 Census of Population included questions on county of location of the dwelling, the period when the dwelling was built, and the type of dwelling. These questions can be used to weight the BER data to national level. Table 15 presents an initial weighting of BERs up to national level using the 2011 Census of Population. The weights were calculated by dividing the number of households in the Census by the number of unique BER households. In cases where a household had more than one BER carried out in the period 2009-2014 only the most recent BER was used. Around 7% of Census households were excluded because there were no BER households in the particular stratum e.g. detached houses in Dublin 1 that were constructed in the period 1919-1945. A stratum was classified as a unique combination of County (52 categories - Dublin postal districts were distinguished), period of construction (nine categories) and dwelling type (4 categories). The BER contains more disaggregated dwelling types, e.g. mid-terrace house, but these had to be aggregated to correspond to the Census classification.

In 2015 both the Census and BER files will be retrospectively post-coded. This will make it possible to match both files at household level as postcodes will be unique at letter-box level. This will create an opportunity to calculate weights in a more precise manner.

Tables 2-11 only include the latest BER published for each dwelling from January 2009 to December 2014; hence the total number of BER certificates is lower than the total in Table 1. Table 2 shows the general impact of the age of the dwelling on the BER profile. It can be linked with changes to the Building Regulations that require new homes to be more energy efficient.

Table 15 is an analysis of BER properties after they have been weighted to Census 2011 level. It can be compared with the national profile in Table 2. See the entry under National representativeness for more details.

Scan the QR code below to view this release online or go to
http://www.cso.ie/en/releasesandpublications/er/dber/domesticbuildingenergyratingsquarter42014/