This release has been compiled during the COVID-19 crisis. The contents of this release have been impacted by the COVID-19 situation. For further information see Information Note on the Implications of Covid-19 on the Crops and Livestock June Provisional Estimates Release. 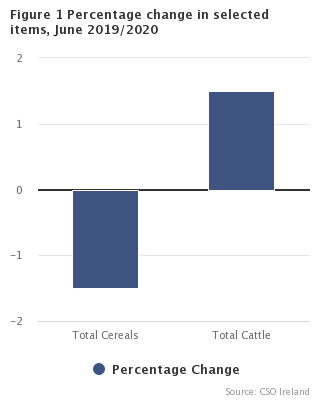 The June 2020 results also show that:

This release presents provisional estimates of land utilisation and livestock numbers in June 2020 at State level. The estimates for cattle and for crops are obtained from administrative data from the Department of Agriculture, Food and the Marine (DAFM). Breeding bull data is received quarterly from the Irish Cattle Breeding Federation (ICBF).

Farms where the agricultural area used was at least one hectare (2.47 acres) are included in the June Agricultural Sample Survey. Farms with less than one hectare may also be included if they were engaged in intensive production.

The results for crops are based on data obtained from the DAFM Basic Payment Scheme.

The results for cattle are obtained from DAFM’s Animal Identification and Movement (AIM) system, formerly known as the Cattle Movement Monitoring System (CMMS). This system was introduced at the beginning of 2000 and involves electronically recording data on animal movements. Breeding bull data is received quarterly from the Irish Cattle Breeding Federation (ICBF).

Due to the COVID-19 crisis, the collection of the Census of Agriculture has unavoidably been deferred from it's planned collection date of 1st June to 1st September. This has impacted the availability of the 2020 results for sheep data. This data is due to be published in the Crops and Livestock Survey June Final release in April 2021.

Scan the QR code below to view this release online or go to
http://www.cso.ie/en/releasesandpublications/er/clsjp/cropsandlivestocksurveyjuneprovisional2020/