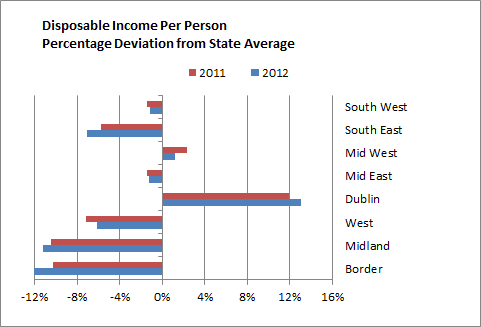 Viewed from a  longer term perspective (i.e. from 2003 onwards) the divergence between the regional authority areas was at its lowest in 2010, with a difference between maximum and minimum disposable incomes of €3,467,  but has widened  in  2011 and 2012.

While the county figures involve uncertainty they do provide a useful indication of the degree of variability at county level.  Dublin,  Kildare,  Limerick  and Cork  are the only counties where per capita disposable income exceeds the state average in 2012.

At the other end of the spectrum, some  counties  have never had per capita disposable  income greater  than the State average  during the entire period  2003 to 2012.

Adding social transfers to primary income and subtracting off income taxes and social insurance contributions, results in disposable income. In the counties of  Dublin, Kildare, Meath and Wicklow and Cork, primary income exceeded disposable income in 2012  (see Tables 1 & 2). These are the counties with the highest  employment   rates as indicated in the results of  the  2011 Census.

Tables 1 to 8 show all the county income information and tables 9 to 18a  show regional GVA information. This year, Tables 9a and 9b have been introduced into the release for the first time. 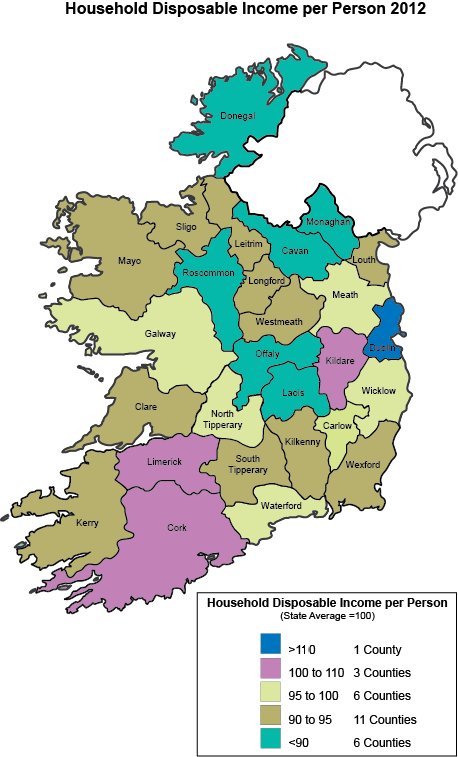 Show Table 3 Estimates of Disposable Income Per Person by Region and County, 2003 to 2012

Show Table 4 Indices of Disposable Income Per Person by Region and County, 2003 to 2012

Show Table 5 Estimates of Total Income Per Person by Region and County, 2003 to 2012

Show Table 7 Estimates of Disposable Income Per Person (Excluding Rent) by Region and County, 2003 to 2012

Show Table 8 Indices of Disposable Income Per Person (Excluding Rent) by Region and County, 2003 to 2012

Show Table 12 GVA at Basic Prices, population and persons at work for each region, 2011

Show Table 13 GVA at Basic Prices, population and persons at work for each region, 2012

Show Table 16 Percentage share of GVA at Basic Prices produced by each branch within each region, 2011 and 2012

Show Table 16a Percentage share of GVA at Factor Cost produced by each branch within each region, 2011 and 2012

Show Table 17 Percentage share of GVA at Basic Prices of each branch produced by each region, 2011 and 2012

Show Table 17a Percentage share of GVA at Factor Cost of each branch produced by each region, 2011 and 2012

Revisions to national accounts data published in National Income and Expenditure 2013 have been carried through into these tables, as is the usual practice.

Tables15 to 18a provide GVA for the regions broken down into three main sectors of the economy. In former releases these sectors were defined as in the publication “National Income and Expenditure 20XX” (NIE 20XX) and corresponded with the national classification system of industries used in National Accounts at the time. Since the 2009 release (as linked to NIE 2010) the sectors have been revised to correspond with the NACE Rev.2 classification system. The main effect of the NACE Rev.2 (re)classification, on the three sectors distinguished in tables 15 to 18a, is that the Publishing Industry (including the publishing of software) has been reclassified from the Manufacturing sector to the Services sector. This results in the Services sector accounting for a larger proportion of total GVA compared to former releases. Similarly, the Manufacturing sector accounts for a  smaller proportion of GVA than in former releases.

The more significant aggregates in all tables in these accounts (e.g. gross value added, compensation of employees) are compiled internally according to the NACE classification system. Again the NACE Rev.2 system has been used  compared to the NACE Rev.1 system in earlier releases. The retrospective data for the years 2003 to 2011 have also been recalculated using NACE Rev.2. This inevitably gives rise to some revisions to the retrospective series.

The estimates for the State for the different components of household income have already been published in the National Income and Expenditure Report 2013 (NIE 2013). The other current transfer payments to and from households are included in this household income report on a net basis with social benefits.

The CSO publishes population estimates at regional level annually but not at county level. County populations for 2003 to 2012 have been estimated in this report by applying the year to year changes at regional level, shown in the revised regional population figures which were compiled following the publication of the 2006 and the 2011 Censuses, to the counties within the regions. The population figures for 2006 and 2011 have been taken directly from the 2006 and 2011 Censuses.

Value added is firstly calculated at factor cost, which includes all subsidies and excludes all taxes. Conversion to a valuation at basic prices is achieved by subtracting overhead subsidies and adding overhead taxes. Conversion to market prices is then obtained by subtracting product subsidies and adding product taxes (see table 14). Most of the tables in this report on GVA are based on GVA at basic prices. However tables 15a to 18a are based on GVA at factor cost. All the results in this release are based on the  ESA2010 system of accounts which came into effect in 2012 and is now in use throughout the European Union. This change of definitions has resulted in significant  step increases in GVA/GDP at state and regional levels (please see http://cso.ie/shorturl.aspx/233 for a detailed explanation).

The indices of GVA per person in relation to the  EU28=100  for years 2003 to 2012, shown in table 11, are based on the relevant position of Ireland as given on the Eurostat website.

Scan the QR code below to view this release online or go to
http://www.cso.ie/en/releasesandpublications/er/cirgdp/countyincomesandregionalgdp2012/