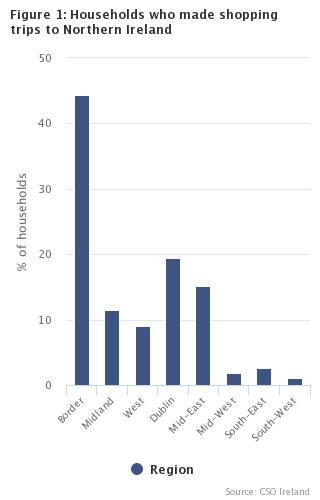 Households were asked how many trips were made to Northern Ireland by household members in the 12 months before the interview and how many of these trips were for the purpose of shopping. Routine trips such as trips to a person’s place of employment, to college, to farmland/property across the border, etc. were not included.

In the 12 months before the interview, 13.6% of households made at least one shopping trip to Northern Ireland. See table 1a.

Number of household members on most recent shopping trip

Type of purchase in Northern Ireland

Food and groceries was the most common category among all households who shopped in Northern Ireland (65.8%), 54.7% bought Clothes, footwear and sports goods, 40% bought Alcohol, 21.7% purchased Cosmetics and 13.5% purchased Petrol/diesel. Nearly three quarters (74.1%) of households in the Border region purchased Food and Groceries, compared with just over half (50.8%) of households in the Mid-East region. See table 2a and figure 4.

Show Table 1(b) Regional breakdown of household who took shopping trips to Northern Ireland in the last 12 months, Quarter 1 2018

Show Table 1(e) Number of persons in the household on the most recent shopping trip to Northern Ireland taken in the last 12 months, Quarter 1 2018

Show Table 2(a) Goods purchased on most recent trip to Northern Ireland, Quarter 1 2018

Show Table 2(d) Total household expenditure on shopping in Northern Ireland in the 12 months prior to interview, Quarter 1 2018

The survey instrument for the Cross-Border Shopping survey has changed since it was last carried out in Q2 2010, when it was carried out as a module of the Quarterly National Household Survey (QNHS). The Labour Force Survey (LFS) replaced the Quarterly National Household Survey (QNHS) at the beginning of Q3 2017. The introduction of the new LFS is part of a wider Household Survey Development (HSD) modernisation project. With this change, modules previously carried out as modules of the QNHS, are now carried out as part of the General Household Survey (GHS). The GHS is a national survey that place takes place three or four times each year. The survey usually has a core of common demographic questions that are always asked (e.g. age, sex, education, etc.). Each survey also has a specific theme: for example, in the second half of 2017, the survey measured participation rates of adults in further education; in the first quarter of 2018 the GHS covered the Cross-Border Shopping survey and the ICT Household survey.

Here below are the topics we have covered so far:

The Cross-Border Shopping survey was carried out in the three months from January to March (Quarter 1) in 2018. The questionnaire asked questions about visits to Northern Ireland, and in particular, household spend on shopping trips to Northern Ireland.

The Cross-Border Shopping survey was collected directly from private households. Institutional households, (e.g. nursing homes, barracks, boarding schools, hotels etc.) are not covered by the survey. A household is defined as a single person or group of people who usually reside together in the same accommodation and who share the same catering arrangements. The household members are not necessarily related by blood or marriage.

The data was collected by a team of up to one hundred Field Interviewers and ten Field coordinators (each with a team of ten interviewers). Interviewers were provided with a map of each of their interview areas as well as a listing of the address of each of the selected households. These interviewers also working on CSO surveys such as the Survey on Income and Living Conditions and the Labour Force Survey. Interviewers received a manual with information such as detailed explanations about the questionnaire, definitions of the concepts involved and examples.

It was conducted using a team of face-to-face interviewers using Computer Assisted Personal Interviewing (CAPI). This enabled the use of extensive checks in the BLAISE interviewing software to make sure correct and coherent data was collected.

One person from each household was selected. Information was collected directly from respondents - proxy responses from other members of the household were not accepted.

The sample for the General Household Survey (GHS) is stratified using administrative county and the Pobal HP (Haase and Pratschke) Deprivation Index (quintile). A two-stage sample design is used. In the first stage 1,300 blocks are selected using Probability Proportional to Size (PPS) sampling. In the second stage households are selected using Simple Random Sampling (SRS). This ensures each household in the sample frame has an equal probability of selection.

The total sample size for the Cross-Border Shopping survey in Quarter 1 2018 was 9,900 households. The number of valid responding households was 5,291.

The survey results were weighted to agree with population estimates broken down by age, sex and region and are also calibrated to nationality totals

To obtain the final household weights for the results, after the previous steps were carried out, the distribution of households by deprivation, NUTS3 region, sex and age was calibrated to the population of households in Quarter 1 2018 (as derived from the LFS Survey). The CALMAR2-macro, developed by INSEE, was used for this purpose.

The sum of row or column percentages in the tables in this report may not add to 100.0% due to rounding.

Percentage breakdowns exclude cases where the interviewee did not respond.

Data are subject to sampling and other survey errors, which are relatively greater in respect of smaller values.

The regional classifications in this release are based on the NUTS (Nomenclature of Territorial Units) classification used by Eurostat. Until Q4 2017, the NUTS3 regions corresponded to the eight Regional Authorities established under the Local Government Act, 1991 (Regional Authorities) (Establishment) Order, 1993, which came into operation on 1 January 1994 while the NUTS2 regions, which were proposed by Government and agreed by Eurostat in 1999, were groupings of those historic NUTS3 regions.

However, the NUTS3 boundaries were amended on 21st of November 2016 under Regulation (EC) No. 2066/2016 and have come into force from Q1 2018. The changes resulting from the amendment are that County Louth has moved from the Border to the Mid-East and what was formerly South Tipperary has moved from the South-East to the Mid-West, resulting in the new NUTS2 and NUTS3 regions. For the purposes of this release, the old NUTS3 regions were used. The composition of the regions used in this release is set out below.

The composition of the regions is set out below.

The Pobal Haase-Pratschke Deprivation Index is used to create the underlying sample and is used to analyse the data. The Index uses Census data to measure levels of disadvantage or affluence in a geographical area. More detailed information on the index can be found here: https://www.pobal.ie/research-analysis/

The five quintiles are described below:

While the main purpose of the QNHS was the production of quarterly labour force estimates, there is also a provision for the collection of data on social topics through the inclusion of special survey modules. The selection of the major national modules undertaken to date has been largely based on the results of a canvass of users (over 100 organisations) that was conducted by the CSO in 1996, 2002, 2006, 2008 and most recently 2011. The results of the canvass are presented to the National Statistics Board and they are asked to indicate their priorities for the years ahead.

The schedule for social modules in any given year is based on the following structure:

Some of the social modules published to date in the QNHS are outlined below:

The Central Statistics Office wishes to thank the participating households for their co-operation in agreeing to take part in the Q1 2018 Cross-Border Shopping survey and for facilitating the collection of the relevant data.

Scan the QR code below to view this release online or go to
http://www.cso.ie/en/releasesandpublications/er/cbs/crossbordershopping-households2018/