Number of enterprises decreased by 0.3% while the number of persons engaged in Irish businesses increased by 3.3% in 2018 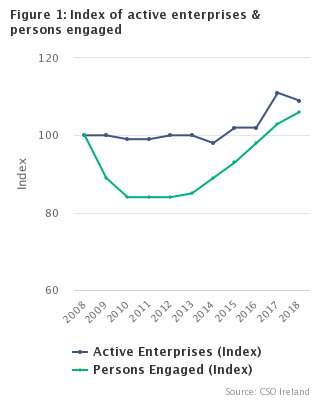 This release provides data on the "Business Demography" of Ireland for reference year 2018 and earlier years.

There were 270,344 active enterprises in the private business economy1 in Ireland in 2018, representing a decrease of 0.3% over the previous year. This decrease is distributed across all sectors apart from the Construction and Financial sectors which increased by 0.6% and 6.8% respectively during the year. There were over 1.6 million persons engaged2, which is the highest figure since the series began in 2008. This represents an increase of 3.3% in the number of persons engaged from 2017. The increase in employment was distributed across all size classes with the largest increase in the 250+ size class of 6.2%. See Summary table and Tables 1, 2 & 3.

When looking at the distribution of persons engaged across all sectors in 2018, the Services sector accounted for 45.5% of the total, followed by Distribution (23.3%) and Industry (15.6%). The Construction sector (44.7%) showed the biggest percentage rise in persons engaged over the five years between 2014 and 2018, followed by Services (24.0%) and Industry (19.0%). Distribution and Financial Service Activities showed more modest growth at 11.3% and 9.3% respectively. See Figures 4 & 5 and Table 2.

The number of births decreased in all sectors in 2018, from the Financial sector with a decrease of 29.1%, to the Industry sector with a 38.7% reduction on the previous year. See Figures 9 & 10 and Table 4.

There were 16,011 enterprises which ceased during 20177, containing almost 20,000 persons engaged. This represents an increase of 9.4% in enterprise deaths compared with 2016.

Enterprise death figures for 2017 are estimated as an enterprise needs two full years of inactivity before being declared a final death.

In EU terms8 (latest data available is for 2017), Ireland’s largest sector of active enterprises, the Services sector, at 51% of total enterprises, is higher than the EU average (49%), but lower than the UK (60%) and Luxembourg (58%) as well as eleven other Member States. In 2017, Ireland had the largest percentage share of active enterprises in the EU for the Construction sector at 21%, followed by Slovakia at 20%. This compares to 14% for the EU average, common to Germany and Denmark. Bulgaria had the smallest percentage at 6%, followed by Greece and Portugal at 9%. See Figure 13.

This release covers the reference year 2018, however data on enterprise deaths relates to 2017. Statistics are also provided on enterprise births since 2013 that were still active during 2018. All 2018 enterprise births will be followed for 5 years to assess their survival rate and the resulting effect on employment.

The Background Notes provide more details on the release.

I – Accommodation and Food Service Activities, NACE Rev. 2 codes 55 and 56

Geographical Breakdown for enterprises is an approximation. The county breakdown is based on the address at which an enterprise is registered for Revenue purposes, rather than where the business actually operates from, because no comprehensive administrative data source is currently available for business locations. In particular, where an enterprise has local units in several counties, but one head office where all employment is registered, all its employees will be counted against the county where the head office is located. Enterprises where the county location is categorised as Unknown generally have Revenue registered addresses outside of the Republic of Ireland. However, the employees registered with these addresses are working in the Republic of Ireland.

The labour force comprises persons employed plus unemployed. Persons in employment classify their employment status as being self-employed, employee, assisting relative/family worker or on a state sponsored employment scheme. Employees are defined as persons who work for a public or private employer and who receive compensation in the form of wages, salaries, fees, gratuities, payment by results or payment in kind. Self-employed persons who pay themselves a working wage are classified as self-employed in the LFS.

The population of enterprise deaths in 2017 contains all enterprises that ceased at some point during the year 2017. The figures given in the release in relation to deaths are final figures for the period 2008 – 2016. The death figures for 2017 in this release are estimates of final deaths based on analysis of preliminary and final death figures from previous years. This will be revised to a final figure next year, when two years of death data is available. The death figures for 2017 in the Statbank tables are preliminary based on one year’s data, and are not adjusted as per the estimates given in this release.

The population of enterprise births in 2018 contains all enterprises that started at some stage during the year 2018.

7Population, births and survival data in this release relates to 2018, but the latest deaths data available is for 2017.

8Business Demography figures at an EU level are available at the following link. Latest data available is for 2017.

Scan the QR code below to view this release online or go to
http://www.cso.ie/en/releasesandpublications/er/bd/businessdemography2018/