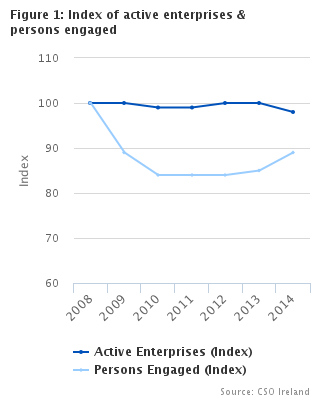 This release provides data on the “Business Demography” of Ireland for the period 2008 - 2014. Revised figures for 2008 - 2012 are included in this release, along with newly published figures for 2013 and 2014. The detailed tables provided with this release present a breakdown of the numbers of active enterprises and newly birthed and ceased enterprises, classified by economic activity, employment size and legal form. Related employment numbers are also outlined. A detailed county level breakdown is also provided in relation to active enterprises and employment numbers only.

The Business Demography series 2008 - 2012 has been revised due to active enterprise definition changes1. The historic definition (used in the old series) of an active enterprise outlined that an enterprise was active if it either paid VAT, had employees, filed a Corporation Tax return or filed an Income Tax return for the reference year. This definition also allowed for national methods to apply when determining enterprise activity (if an enterprise was only active by virtue of activity on the Income Tax file, it would only be considered active if its turnover was greater than €50,000 in the year).

"in a certain period it generates turnover, employs staff or makes investments in the period".

There were over 238,000 active enterprises in the private business economy in Ireland in 2014, with over 1.3 million persons engaged4. This compares to over 244,000 active enterprises and over 1.5 million persons engaged in 2008. The Services sector5 accounted for over half (51.3%) of all enterprises in 2014, with the Construction sector accounting for less than a fifth (19.9%). In 2008 the Services sector accounted for less than half (46.7%) while Construction accounted for over a quarter (25.3%) of all enterprises. See figures 4 & 5 and summary table.

A large decrease (30.8%) in the number of births was recorded in Sector B “Mining and Quarrying” between 2013 and 2014, a sector with relatively low enterprise numbers (411 active enterprises in 2014 including 18 new enterprise births). Sector K “Financial and insurance activities excluding activities of holding companies (K-642)" experienced the highest decrease (34.6%), between these two years. In 2014, Sector K had 418 enterprise births, compared to 639 in 2013. See figure 11.

The sector with the largest percentage increase in the number of enterprises deaths was Sector K “Financial and insurance activities excluding activities of holding companies” with an increase of over 77.2%. This was followed by Sector N “Administrative and support service activities” and Sector D "Electricity, gas, steam and air conditioning supply" who also experienced large percentage increases albeit some of these sectors have low enterprise population numbers. Although the number of overall deaths has increased in the 2008 - 2013 period, the number of deaths in Sector F"Construction" has dropped by 41.2% in the same period. See figure 12.

In EU terms10 (latest data available is for 2013), Ireland’s largest sector of active enterprises, the Services sector, at 51% is higher than the EU average (46.5%) but lower than Germany (52%), and the UK (57%) as well as six other Member States. The Services sector is also the UK's largest sector of active enterprises. In 2013, Ireland had the largest percentage share of active enterprises in the EU for Sector F “Construction” at 20% along with Slovakia. This compares to 15% for the EU average, the UK at 15% and Germany at 13%. Bulgaria had the smallest percentage at nearly 6%, followed  by Latvia and Romania at 9%. See figure 14.

This release covers the reference year 2014, however data on enterprise deaths relates to 2013. Statistics are also provided on enterprise births since 2008 that were still active during 2013 and 2014. All 2014 enterprise births will be followed for 5 years to assess their survival rate and the resulting effect on employment.

1The Business Demography series 2008 - 2012 has been revised due to active enterprise definition changes. The starting point for all CSO enterprise surveys is the CSO's Central Business Register.  This register contains the active population of enterprises and is updated principally using administrative data as received by CSO from the Revenue Commissioners.   The various Revenue Income Tax, Corporation Tax, VAT and PREM (P35) datasets as received at varying points over a calendar year provide the essential update information for the creation of the active population of enterprises which need to be measured for economic activity.  This information is, in turn, supplemented by information received from the Companies Registration Office (for example on the legal form of the enterprise) and from updates received as part of the surveying of enterprises.

The historic definition of what constitutes an active enterprise outlines that an enterprise is active if it meets any one of the following criteria:

- Paid VAT during the reference year

- Have employees during the reference year

- File a Corporation Tax return for the reference year

- File an Income Tax return for the reference year with turnover of over €50,000.

Furthermore, Eurostat rules allow some flexibility to interpret the above and outline that

“If there is insufficient information on turnover or employment to determine whether or not an enterprise is active, then national methods leading to this aim will be accepted”.

"in a certain period it generates turnover, employs staff or makes investments in the period"

Working Proprietors (Proprietors and family members); included here are those proprietors, partners, etc and members of their families who work regularly in the firm and are not paid a definite wage or salary. Working Propreitors is not a full count of self-employed individuals as some self-employed receive a wage and are returned via annual employment returns and are included in the Employees calculation.

5The composition of sectors used in the graphs is as follows:

A birth occurs when an enterprise starts from scratch and actually starts activity. An enterprise creation can be considered an enterprise birth if new production factors, in particular new jobs, is created. If a dormant unit is reactivated within two years, this event is not considered a birth.

The population of enterprise births in 2014 contains all enterprises that started at some stage during the year 2014.

9Population, births and survival data in this release relates to 2014, but the latest deaths data available is for 2013.

10Business Demography figures at an EU level are available at the following link. Latest data available is for 2013.

Scan the QR code below to view this release online or go to
http://www.cso.ie/en/releasesandpublications/er/bd/businessdemography2014/