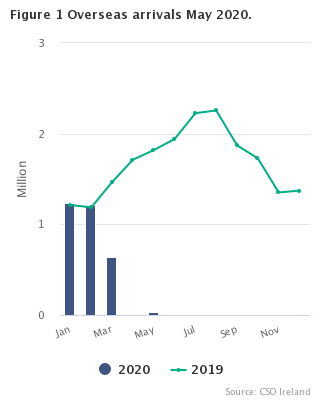 May 2020 saw an extraordinary collapse in overseas travel to and from Ireland as the effects of the COVID-19 crisis continued. There were just 28,300 arrivals in May 2020 and 36,300 departures. This compares with monthly travel of more than 1.8 million in each direction in May 2019, an annual fall of 98% (See Table 1).

Show Table 1 Overseas arrivals and departures by mode and route, May 2019 and 2020

Show Table 2 Overseas arrivals and departures by mode and route, January-May 2019 and 2020

For convenience, all persons arriving or departing overseas are allocated to one of four entry or exit routes. These are Cross-Channel (Great Britain, Isle of Man and the Channel Islands), Continental (other European countries), Transatlantic (North & South America, including the Caribbean) and Other (Asia, Africa, Oceania, etc.).

Scan the QR code below to view this release online or go to
http://www.cso.ie/en/releasesandpublications/er/ast/airandseatravelstatisticsmay2020/