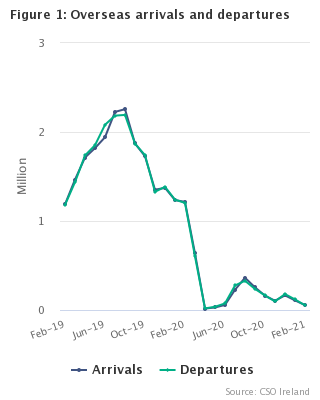 Show Table 1 Overseas arrivals and departures by mode and route, February 2020 and 2021

Show Table 3 Overseas arrivals and departures by mode and route, January-February 2020 and 2021

Departures have the same scope as arrivals except that they refer to persons embarking for international destinations.

Scan the QR code below to view this release online or go to
http://www.cso.ie/en/releasesandpublications/er/ast/airandseatravelstatisticsfebruary2021/