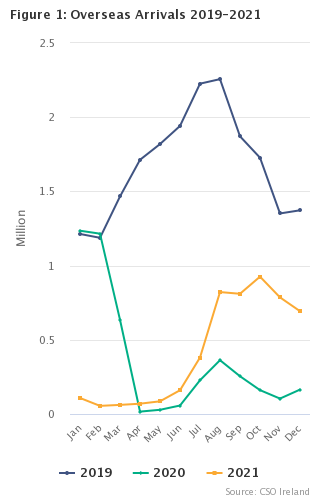 Show Table 1A Overseas arrivals by year, month and mode

Show Table 1B Overseas departures by year, month and mode

Show Table 2A Overseas arrivals by year, month and route

Show Table 2B Overseas departures by year, month and route

Arrivals are all people disembarking at the airports in Cork, Dublin, Galway, Kerry, Knock, Shannon or Waterford or the seaports in Dublin, Dun Laoghaire, Ringaskiddy or Rosslare from destinations not on the island of Ireland. Transfer passengers are included while domestic air passengers and cruise passengers are excluded.

The same definition is used for departures, but refers to people embarking for destinations not on the island of Ireland.

For convenience, all people arriving or departing overseas are allocated to one of four entry or exit routes. These are cross-channel (Great Britain, Isle of Man and the Channel Islands), continental (other European countries), Transatlantic (North & South America, including the Caribbean) and Other (Asia, Africa, Oceania, etc.).

All routes are broken down into separate countries and country groupings. These refer to the country of departure for the flight or sea crossing for an arriving person, or the country of arrival for a person who departs. The country does not refer to the country of residence or country of origin or destination for the person travelling (this information was previously published in the ‘Overseas Travel’ releases). For example, a person who flies from John F Kennedy airport (United States of America) to Heathrow (Great Britain) and then to Ireland will be counted as arriving from Great Britain, as this is where their flight to Ireland originated.

Scan the QR code below to view this release online or go to
http://www.cso.ie/en/releasesandpublications/er/ast/airandseatravelstatisticsdecember2021/