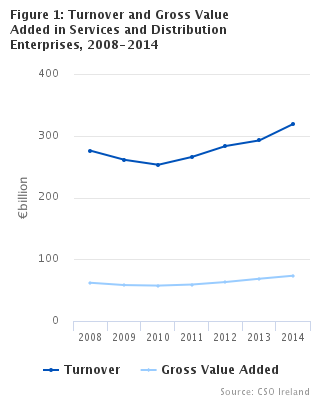 For the original series, the split between persons engaged in Irish and foreign owned Services and Distribution enterprises was 80/20 in favour of Irish owned enterprises. This breakdown adjusted to around 78/22 after all revisions had been implemented.

Updating the Services and Distribution series for the methodological improvements referenced above (in particular counting more enterprises and the positive impact of certain Research & Development capitalisation on Gross Value Added (GVA) levels) , results in higher estimates for GVA – an increase in the range of 17-28%,  depending on the year. See Figure 4.

Services and Distribution in Ireland, year on year changes  2013-14

GVA by nationality of ownership

Persons engaged in Services and Distribution by nationality of ownership

Please note: Additional analysis for Services and Distribution sectors in Ireland, including international comparisons, will be available in the Business in Ireland publication. This is due to be published by the end of November.

The Annual Services Inquiry (ASI) has been conducted on annual basis since 1991. The purpose of the survey is to provide estimates of the principal trading aggregates for all enterprises in the retail, wholesale, transportation and storage, accommodation and food, information and communication, real estate, professional, scientific, technical, administrative and other selected services sectors.

Use of Administrative data

The original series was aggregated using grossing factors. This method has been revised in the new series.  Instead of grossing, the use of administrative (tax ) data is used instead.

For every non-respondent or non-surveyed enterprise a survey return is created using tax information. The primary financial value the survey uses is profit/loss data with estimates for labour costs added to arrive at a value for GVA. This is derived from the administrative data. Other financial variables normally received from the survey form are estimated using actual survey returns as the data is not available from the administrative data. This is done using ratio-estimators.  A basic example of the concept would be the ratio of turnover to gva. If the ratio for a particular Nace is 4:1 for turnover to GVA, we would simply multiply the derived administrative GVA by 4 to give us a turnover value.

Number of Persons Engaged includes all full time and part-time employees. It also includes proprietors, partners and family members who work for an enterprise. It excludes agency workers.

Scan the QR code below to view this release online or go to
http://www.cso.ie/en/releasesandpublications/er/asi/annualservicesinquiry2014/