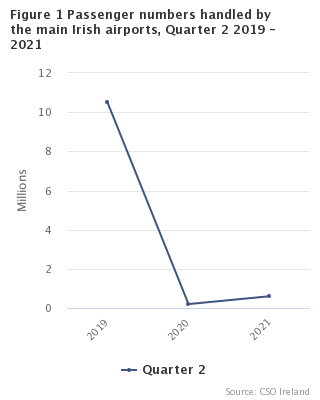 Dublin airport accounted for 93.0% of all air passengers handled in the second quarter of 2021.

Show Table 1B: Number of passengers classified by month handled by main airports

Show Table 3A: Number of flights classified by arrivals and departures handled by main airports, Quarter 2 2021

Show Table 3B: Number of flights classified by month handled by main airports

Show Table 4A: Top 10 arrivals and departures for Dublin airport by number of passengers, Quarter 2 2021

Show Table 4B: Top 5 arrivals and departures for Cork airport by number of passengers, Quarter 2 2021

The data in this release provides details on the number of passengers classified by arrivals and departures, and by reference to national and international traffic; the number of flights by arrivals and departures and information on air freight and mail (in tonnes).  The release also highlights the top routes for each of the five main airports: Dublin, Cork, Shannon, Knock and Kerry. In 2020, the top five airports represented 99.6% of all air passengers.

The statistics in this release are not fully coherent with the Air and Sea Travel statistics. The differences in passenger numbers which are typically less than 0.5%, arise because the Air and Sea Travel statistics exclude transit passengers, domestic air travel and flights to Northern Ireland. It should be noted that passenger numbers for Shannon and Dublin airports exclude transit passengers on technical transit flights as these are fuel stop only flights.

Seasonally adjusting the Aviation data series during the COVID-19 crisis period will be challenging until the scale and shape of its impact on the time series is better understood. The initial seasonally adjusted results might be revised for some months ahead as future observations become available. Users should be aware that there is increased uncertainty around the seasonally adjusted figures during this period.

Scan the QR code below to view this release online or go to
http://www.cso.ie/en/releasesandpublications/er/as/aviationstatisticsquarter22021/