Decrease of 20.4% in number of passengers handled by main Irish airports in Quarter 1 2020 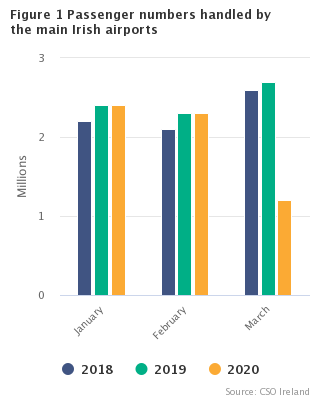 In the first quarter of 2020, over 5.9 million passengers passed through the five main Irish airports, a decrease of 20.4% over the same period in 2019.

The data shows modest increases in passengers numbers for January and February but passenger numbers for March 2020 showed a drop of 57.5% compared to the same month in 2019. This decrease is associated with the restrictions imposed in March 2020 due to COVID-19. See table 1b.

Passenger numbers decreased in all five airports. Dublin airport accounted for 86.9% of all air passengers handled in the first quarter of 2020.

Show Table 1B: Number of passengers classified by month handled by main airports

Show Table 3A: Number of flights classified by arrivals and departures handled by main airports, Quarter 1 2020

Show Table 3B: Number of flights classified by month handled by main airports

Show Table 4A: Top 10 arrivals and departures for Dublin airport by number of passengers, Quarter 1 2020

Show Table 4B: Top 10 arrivals and departures for Cork airport by number of passengers, Quarter 1 2020

The data in this release provides details on the number of passengers classified by arrivals and departures, and by reference to national and international traffic; the number of flights by arrivals and departures and information on air freight and mail (in tonnes).  The release also highlights the top routes for each of the five main airports: Dublin, Cork, Shannon, Knock and Kerry. In 2019, the top five airports represented 99.8% of all air passengers.

Scan the QR code below to view this release online or go to
http://www.cso.ie/en/releasesandpublications/er/as/aviationstatisticsquarter12020/