Births continue to fall while deaths rise in 2020 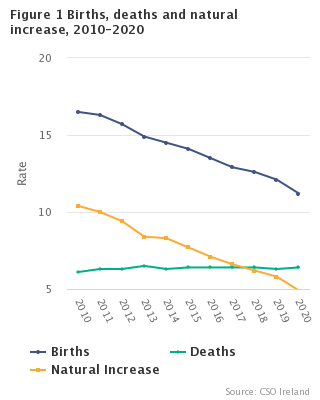 Death due to intentional self-harm is classified as an unnatural death and therefore, must be referred to the Coroner for investigation. This investigation can take a protracted length of time to complete for various reasons (such as getting medical reports, health and safety reports, engineer’s report, the involvement of the Director of Public Prosecutions etc.) and this delays the registration of such deaths.  There were 741 deaths registered late in 2020, of which 444 were male and 297 were female.   There were 512 of these late registered deaths that occurred in 2018 and 229 that occurred in various years prior to 2018.   See table B.

To address this problem the CSO publishes tables of late registered deaths by cause of death, sex and specific age-groups in the relevant Vital Statistics Annual Report. Numbers of deaths registered late due to intentional self-harm in 2020 will be included in the Appendix 2020 of the Annual Report 2020 and will be referred to the year that the death occurred i.e. 2018 and prior. These will be published in table 3.C and 3.D of that report which is scheduled for dissemination in October 2022.  Therefore, any additional deaths due to intentional self-harm will be added to the deaths that were registered in time to be included in the relevant Annual Report.

There were 437 deaths due to intentional self-harm in 2018, 327 (or 74.8%) males and 110 (or 25.2%) females and were reported in table 3.30 of the Vital Statistics Annual Report 2018.  Any death assigned an underlying cause of death that is included in the 512 late registered deaths in 2020, and where death occurred in 2018, will be added to the 437 figure of deaths due to intentional self-harm when the Vital Statistics Annual Report 2020 is published.  Please refer to the CSO open data portal (tables VSD33 and VSD34) for the most up to date figures on deaths from intentional self-harm.

The leading single cause of death in 2020 varied widely by age group. Among those aged from 15 to 34 years, external causes of death including accidents, suicide and other ranked first (205 deaths). Among individuals aged 35-74, cancers were the leading single cause group while for those aged 75 and older, it was diseases of the circulatory system.  See table 12 and figure 5.

The average (mean) time-lag between the date of death and the registration of death was 54 days while the median (mid-point in data) was 24 days in 2020.

Show Table 5 Number and percentage of births registered within and outside marriage/civil partnership, classified by age of mother, 2020

Show Table 6 Number and percentage of births registered within and outside marriage/civil partnership, classified by area of residence of mother, 2020

Show Table 7 Births registered, classified by area of residence and age of mother, 2020

Show Table 8 Births registered outside marriage/civil partnership, classified by area of residence and age of mother, 2020

Show Table 10 Deaths registered by county of residence of deceased, 2020

Show Table 11 Deaths registered by cause of death and county of residence of deceased, 2020

Show Table 12 Deaths registered classified by cause and age-group, 2020

Show Table 13 Male deaths registered classified by cause and age-group, 2020

Show Table 14 Female deaths registered classified by cause and age-group, 2020

Show Table 15 Infant and neonatal mortality by area of residence of deceased, 2020

Show Table B - Deaths which were registered on the authority of the Superintendent Registrars in 2020, classified by principal groups of causes, sex and year of occurrence

From 1st January 2018 the CSO is using IRIS software to assign the UCOD.  IRIS is a European developed automated coding software, endorsed by Eurostat and is maintained by the IRIS institute and all W.H.O. updates to the ICD-10 classification are included according to the WHO timelines.

Births and deaths (where no inquest has been held) which have not been registered within one year of their occurrence can be registered only on the authority of the Superintendent Registrars. The tables in the main body of this report exclude such births and deaths. The Appendix to the report contains an analysis of late death registrations in 2020 and of some deaths where an inquest has been held. The number of such deaths registered in 2020 was 444.

Rates for quarter 4 2020, were calculated using the relevant population data in April 2020.

Stillbirth:  Stillbirth weighing 500 grams or more or at gestational age of 24 weeks or more, this definition applies to stillbirth figures from 1995 onwards.

Scan the QR code below to view this release online or go to
http://www.cso.ie/en/releasesandpublications/ep/p-vsys/vitalstatisticsyearlysummary2020/