Births continue to fall while deaths rise in 2019 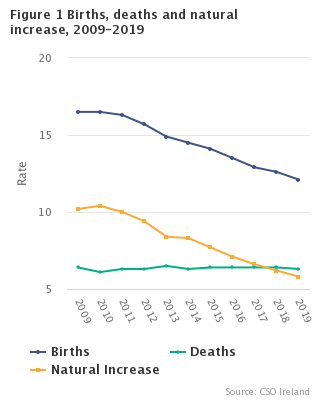 The leading cause of death in 2019 varied widely by age group. Among those aged from 15 to 34 years, external causes of death including accidents, suicide and other ranked first (258 deaths). Among individuals aged 35-74, cancers were the leading cause while for those aged 75 and older, it was diseases of the heart and arteries.  See table 12 and figure 5.

The average (mean) time-lag between the date of death and the registration of death was 51 days while the median (mid-point in data) was 17 days in 2019.

Show Table 5 Number and percentage of births registered within and outside marriage/civil partnership, classified by age of mother, 2019

Show Table 6 Number and percentage of births registered within and outside marriage/civil partnership, classified by area of residence of mother, 2019

Show Table 7 Births registered, classified by area of residence and age of mother, 2019

Show Table 8 Births registered outside marriage/civil partnership, classified by area of residence and age of mother, 2019

Show Table 10 Deaths registered by county of residence of deceased, 2019

Show Table 11 Deaths registered by cause of death and county of residence of deceased, 2019

Show Table 12 Deaths registered classified by cause and age-group, 2019

Show Table 13 Male deaths registered classified by cause and age-group, 2019

Show Table 14 Female deaths registered classified by cause and age-group, 2019

Show Table 15 Infant and neonatal mortality by area of residence of deceased, 2019

Show Table B - Deaths which were registered on the authority of the Superintendent Registrars in 2019, classified by principal groups of causes, sex and year of occurrence

From 1st January 2018 the CSO is using IRIS software to assign the UCOD.  IRIS is a European developed automated coding software, endorsed by Eurostat and is maintained by the IRIS institute and all updates to the ICD-10 classification are included in the software.

Births, classified by area of residence of mother

Births and deaths (where no inquest has been held) which have not been registered within one year of their occurrence can be registered only on the authority of the Superintendent Registrars. The tables in the main body of this report exclude such births and deaths. The Appendix to the report contains an analysis of late death registrations in 2016 and of some deaths where an inquest has been held. The number of such deaths registered in 2016 was 758.

Up to December 2017 regional classifications were based on the NUTS (Nomenclature of Territorial Units) classification used by Eurostat. The NUTS3 regions corresponded to eight Regional Authorities established under the Local Government Act, 1991 (Regional Authorities) (Establishment) Order, 1993, which came into operation on 1 January 1994. The NUTS2 regions, which were proposed by Government and agreed by Eurostat in 1999, are groupings of the NUTS3 regions.

Northern and Western (Border and West), Southern (Mid-West, South-East and South-West) and Eastern and Midland (Dublin, Mid-East and Midland)

For the purpose of this release the population concept of usual residence has been used, i.e. all persons usually resident and present in the State on census night, plus absent persons who are usually resident in Ireland, but are temporarily away from home and outside the State on Census night. All persons are classified according to the region of their usual residence.

A live birth is defined as the complete expulsion or extraction from its mother of a product of conception, irrespective of the duration of pregnancy, which, after such separation, breathes or shows any other evidence of life, such as beating of the heart, pulsation of the umbilical cord, or definite movement of voluntary muscles, whether or not the umbilical cord has been cut or the placenta is attached

Birth Order: Birth order is the number of live born children a woman has in the order in which they are born.

Stillbirth: Stillbirth weighing 500 grams or more or at gestational age of 24 weeks or more. this definition applies to stillbirth figures from 1995 onwards.

Scan the QR code below to view this release online or go to
http://www.cso.ie/en/releasesandpublications/ep/p-vsys/vitalstatisticsyearlysummary2019/