Births fall by 3% while deaths rise very slightly compared to the same quarter in 2013. 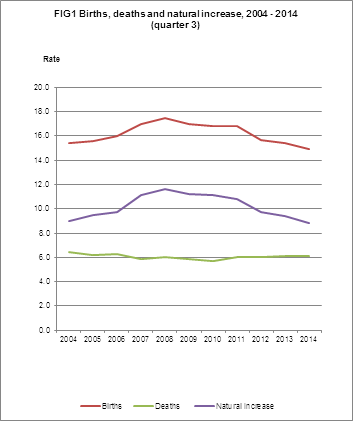 There were 74 infant deaths registered giving an infant mortality rate of 4.3 per 1,000 live births.

The number of births less the number of deaths in quarter 3 2014 resulted in a natural increase of population of 10,196 persons.

There were 2,297 deaths from malignant neoplasms.  This is equivalent to an annual rate of 2.0 per 1,000 population.

The leading cause of death in quarter 3 2014 varied widely by age group.  Among young adults aged 15 to 44, external causes of death including accidents, suicide and other ranked first (177 deaths).  Among individuals aged 45-84, cancers were the leading cause, while for those aged 85 and older, it was diseases of the heart and arteries.

The average (mean) time-lag between the date of death and the registration of death was 54 days while the median (mid-point in data) was 20 days for quarter 3 2014.

The number of marriages registered during the quarter was 8,048 (provisional) equivalent to an annual marriage rate of  7.0 per 1,000 population, 0.2 more than the corresponding quarter of 2013.  See tables 3 and 4.

Civil Partnership legislation was introduced in Ireland on the 1st January,  2011.  The number of civil partnerships registered in the third quarter of 2014 was 119 (provisional), which was 1 less than in quarter 3 2013.  The annual rate per 1,000 population was 0.10 the same as the corresponding quarter of 2013.

Show Table 1 Births classified by age of mother at maternity by quarter, 2009, 2013 and 2014 and their corresponding annual age specific (ASFR) and total period fertility rates (TPFR)

Show Table 2b Deaths registered by cause of death, by age and region, Third Quarter 2014

Show Table 7 Number and percentage of births registered within and outside marriage/civil partnership, classified by age of mother, July - September 2014

Show Table 8 Number and percentage of births registered within and outside marriage/civil partnership classified by area of residence of mother, July - September 2014

Show Table 13 Deaths registered by cause of death and county of residence of deceased, July - September 2014

3) All deaths registered in the quarter/year have been included in the statistics, in some cases with a provisional cause of death. Previously the practice was not to include deaths in the annual summary statistics until the cause of death had been definitely established.

Because of these changes, caution should be taken in directly comparing these mortality statistics with those of previous quarters/years. Many countries have found that moving to ICD10 does affect certain specific categories of causes of death. In particular, a significant drop in the number of deaths attributed to pneumonia and bronchopneumonia has been observed in some countries after moving to ICD10. These deaths were instead assigned to other conditions included on the death certificate.

Revised rates This report contains revisions to previously published rates for Marriages, Births and Deaths with effect from the second quarter of 2006. This is due to revised population estimates and the change from using De Facto population data to Usual Residence population data. All rates for periods prior to the second quarter of 2006 remain unchanged. These revisions were first published in the Vital Statistics First Quarter 2012 report.

Scan the QR code below to view this release online or go to
http://www.cso.ie/en/releasesandpublications/ep/p-vs/vitalstatisticsthirdquarter2014/