This release was compiled during the COVID-19 pandemic. For further information see  Information Note - Impact of COVID-19 on Vital Statistics Quarter 2 2020 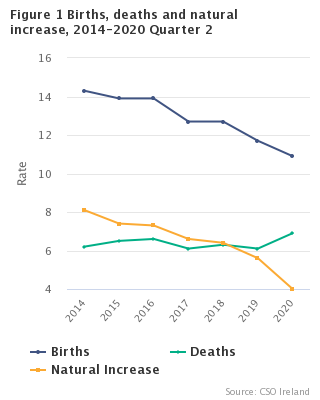 The number of births less the number of deaths in quarter 2 2020 resulted in a natural increase of population of 4,945 persons.

There were 5 babies born to mothers who were resident outside the Republic of Ireland in quarter 2 2020. This accounts for 0.04% of total live births registered in the quarter. See tables 5, 8, 9 and 10.

There were 2,286 deaths from malignant neoplasms. This is equivalent to an annual rate of 1.8 per 1,000 population.

The leading cause of death in quarter 2 2020 varied widely by age-group. For those aged from 15 to 34 years, external causes of death including accidents, suicide and other ranked first (18 deaths). Among individuals aged 35-74, malignant neoplasms (cancer) was the leading cause (1,158), while for those aged 75 and older, it was diseases of the circulatory system (1,617 deaths). See table 14.

The average (mean) time-lag between the date of death and the registration of death was 46 days while the median (mid-point in data) was 25 days for quarter 2 2020.

The number of marriages registered during the quarter was 304 of which 5 were same-sex marriages. This is equivalent to an annual marriage rate of 0.2 per 1,000 population, a decrease of 4.0 from quarter 2 2019. See tables 3 and 4.

Show Table 2b Deaths registered by cause of death and age group, Second Quarter 2020

Show Table 7 Number and percentage of births registered within and outside marriage/civil partnership, classified by age of mother, April - June 2020

Show Table 8 Number and percentage of births registered within and outside marriage/civil partnership classified by area of residence of mother, April - June 2020

Show Table 13 Deaths registered by cause of death and county of residence of deceased, April - June 2020

The Underlying Cause of Death is classified according to the World Health Organisation's International Classification of Diseases, Version 10 (ICD-10), see link below:

Up to December 2017 regional classifications were based on the NUTS (Nomenclature of Territorial Units) classification used by Eurostat. The NUTS3 regions corresponded to eight Regional Authorities established under the Local Government Act, 1991 (Regional Authorities) (Establishment) Order, 1993, which came into operation on 1 January 1994. The NUTS2 regions, which were proposed by Government and agreed by Eurostat in 1999, are groupings of the NUTS3 regions. The composition of the regions is set out below.

Rates for quarter 2 2020, were calculated using the relevant population data in April 2020.

Scan the QR code below to view this release online or go to
http://www.cso.ie/en/releasesandpublications/ep/p-vs/vitalstatisticssecondquarter2020/