These awards are held every two years to recognise innovation and best practice in public service administration and service delivery, and to share ideas across Public Service organisations and sectors. The CSO was one of twenty public service bodies selected for the 2012 awards out of a total of 190 applications.

The EHECS Payroll Project provides an electronic facility to enable companies to extract the required survey information directly from their payroll systems. This facility has been developed in cooperation with the payroll software suppliers in Ireland. It ensures that high quality earnings data is provided in a timely manner while also reducing the level of administrative burden for those companies availing of the facility. 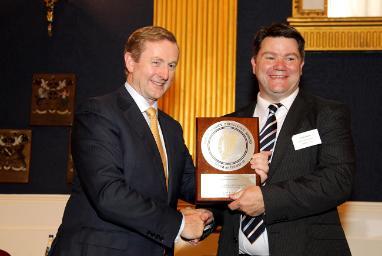 The CSO introduced a new quarterly earnings survey, the Earnings, Hours and Employment Costs Survey (EHECS), in 2008. The EHECS replaced a suite of basic, sector-specific surveys with a more comprehensive survey common to all economic sectors. Aware this would result in an increased burden being placed on respondents, the CSO in cooperation with payroll software providers developed a facility to enable companies extract the required survey information directly from their payroll systems in XML format. It was reasoned that as the earnings data was readily available from payroll systems, electronic returns could be made both easily and promptly by respondents, thereby transmitting high quality data in a timely manner.

In 2009, the ambitions and design of the EHECS were reassessed to understand why the original objectives were not being met. Across a broad range of metrics, from timeliness to response burden, problems were apparent. A review of the project was carried out which brought clarity to the process by prioritizing a number of competing issues. Specifically, it was agreed that the focus of the EHECS should be a short-term indicator, that the XML solution should be “push button” and that any content that interfered with this should be removed. A number of methodological changes were introduced which included reducing the content and complexity of the original questionnaire, introducing a shorter survey form for small enterprises and establishing a specialist XML support team.

The changes made to the EHECS survey, systems and procedures have ensured that the project is now meeting the original project ambitions and is considered by all stakeholders to be a success, the level of which can be seen in the following management metrics:

The XML project is now providing consistent, high quality earnings data that requires very few interventions while also reducing the level of administrative burden for those enterprises availing of the facility. In order to improve on the continued success of the project, the long-term aim is to achieve enterprise response rates to at least 65% and to have the majority of these returned by XML rather than traditional paper questionnaires.