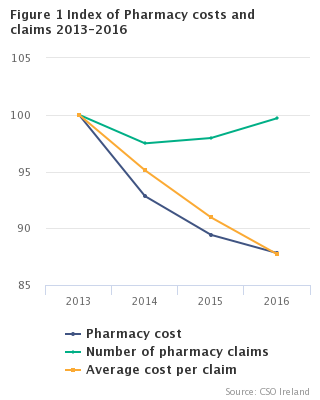 Expenditure on Health Service Executive (HSE) refunded pharmacy claims under the General Medical Scheme (GMS) amounted to just over €1 billion in 2016. This is a decrease of 12% on 2013 levels, despite the number of pharmacy claims staying relatively static over the same period (a marginal fall of only 0.3% to 18.99 million claims in 2016). The decrease in pharmacy cost was largely driven by a fall in the average cost per pharmacy claim of 12.3% - from €60.75 in 2013 to €53.29 per pharmacy claim in 2016.

These payments were paid by the Primary Care Reimbursement Service (PCRS). Please see background notes for a further description of the PCRS and GMS. Please note, care should be taken when examining trends over time in the form of expenditure and average amounts as eligibility criteria can change over time.