These statistics are categorised as Under Reservation. This categorisation indicates that the quality of these statistics do not meet the standards required of official statistics published by the CSO.

For further information see our Under Reservation FAQ page.

Falls in recorded offences across most crime groups in period 2010-14, drop in detection rate in some groups 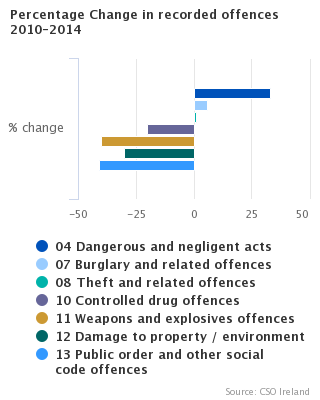 This release provides an overview of recorded crime, as well as detections and outcomes of criminal proceedings for crimes reported to An Garda Siochana during 2014, based on administrative data received in 2016. The number of crimes recorded in 2014 in most Irish Crime Classification System (ICCS) groups had fallen compared with 2010, and half had fallen compared with 2013.

Compared with 2010 Group 04 Dangerous or negligent acts offences, comprising mostly Speeding and Dangerous Driving offences showed the highest increase (up 33%), however several groups including Group 10 Controlled drug offences, Group 11 Weapons and explosives offences, Group 12 Damage to property and the environment, and Group 13 Public order and other social code offences had decreased by more than 20% relative to 2010. Other serious crime groups such as Homicide offences (-10%) and Sexual offences (-18%) had also decreased, while there were increases in Group 07 Burglary and related offences (+6%) and Group 08 Theft and related offences (+1%).

Table 2 provides a full breakdown of the number of crimes recorded and detected by 3-digit ICCS classification for years 2010 to 2014. Table 3 summarises the outcomes of crime offences reported to An Garda Siochana in 2014 providing total figures by 3-digit ICCS classification for the numbers of crimes detected, those with relevant criminal proceedings, as well as the outcomes of commenced criminal proceedings. Table 4 provides a breakdown by age and gender of convictions for crimes reported in 2014. Table 5 provides a regional and divisional breakdown of recorded crimes and detections including a rate for recorded crimes per 100,000 population (except for Groups 01 and 05).