Rise in the number of suicides in 2011 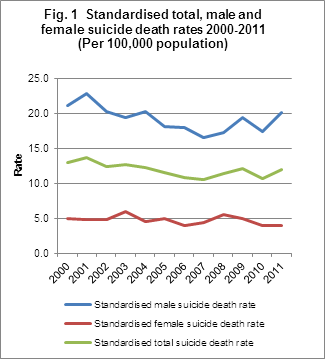 go to full release
1Please see the background notes for further information on the calculation of age-standardised rates.
2The figures should be interpreted with care as suicide registration methods vary between countries.  Attitudes to suicide, the level of proof required for a verdict or classification of suicide etc., are also factors to be considered when comparing data between countries.

Legal determination of the cause of death

The Criminal Law (Suicide) Act 1993 decriminalised the act of suicide.

The average annual number of deaths over the five year period from 2007 to 2011 was approximately 28,000.  In many cases the cause of death is known, i.e. the deceased was under the care of a doctor etc.  In these cases the doctor can fill out the Medical Certificate of the Cause of Death in a relatively straightforward manner as the cause was generally an illness or sickness the deceased suffered.

However, in approximately 20% of all cases (5,000 to 6,000 cases annually) the cause of death is not immediately known and the case is referred to a Coroner.  Deaths from sudden, unexplained, violent and unnatural deaths must be reported and investigated by the Coroner.  The Coroner is an independent office holder with responsibility under the law for the medico-legal investigation.

The Coroner’s investigation may require a post-mortem examination, sometimes followed by an inquest.  The Coroner’s inquiry will establish whether death was due to natural or unnatural causes.  If death is due to unnatural causes then an inquest must be held by law.   An inquest takes place in about 30% of cases referred to a Coroner (some 1,500 to 1,800 cases each year).

The death will be registered by means of a Coroner’s Certificate when the inquest is concluded (or adjourned in some cases).

A Form 104 is issued by the CSO to the Gardaí in respect of most inquest cases. This form is sent to the Divisional Inspector of the relevant location where the death occurred and is then redirected to the Garda that attended the scene of the death.  The Form 104 collects additional information on the circumstances/location of the death and the information returned on this form is strictly confidential under the Statistics Act 1993.

The Garda completing the Form 104 provides his/her opinion as to whether the death was an accident, homicide, suicide or undetermined. That information is taken into account when the CSO assigns a statistical code for cause of death.

The Form 104 was first issued in October 1967 and revised in 1998 following a recommendation by the Taskforce on Suicide, to improve the statistical classification of deaths by suicide.  A copy of the revised version of the form is included in the background notes.

Cause of Death Determination Process

The mortality coder in the CSO examines both the Coroner's Certificate and Form 104, where applicable, to determine the statistical classification of the cause of death.

The CSO manually codes and checks all deaths involving an inquest to ensure that the statistical code is correctly assigned.

The classification system used for cause of death is the World Health Organisation's International Classification of Diseases and Related Health Problems (ICD-10).

In Ireland, suicide is defined as the act of intentionally killing oneself.  The classification of a death as suicide is based on a Coroner’s report and, where necessary, a report from the Garda that attended the scene.

All deaths occurring in the State must be registered.  The Civil Registration Act 2004 (Part 5 subsection 37) states:

“When a death occurs in the State, it is the duty of

(a)    a relative of the deceased who has knowledge of the required particulars in relation to the death, and

within 3 months from the date of death to give to any registrar the required particulars of the death in the form standing specified for the time being by an tArd-Chlaraitheoir”.

A death is registered with a Registrar of Births and Deaths.  A relative or other eligible person must obtain a Medical Certificate of the Cause of Death from the medical practitioner who attended the deceased. This Medical Certificate has the following information:

Part 1(a)     Disease or condition directly leading to death, (this does not mean the mode of dying e.g. heart failure etc., it means the disease that caused death) due to (or as consequence of)

Part 1(b)     Antecedent Causes   (morbid conditions, if any, giving rise to the above cause stating the underlying condition last due to (or as consequence of)

Part 2        Other Significant Conditions (contributing to the death but not related to the disease or condition causing it).

A death is registered when a qualified informant (often a spouse or next-of-kin) attends at the office of the Registrar of Births and Deaths and provides the following information:

This information is recorded on a death notification form.  The person registering the death must also produce a Medical Certificate of the Cause of Death signed by a doctor who treated the deceased within one month prior to death.

All deaths that are registered are forwarded electronically by individual registrar’s offices located around the country to the General Register Office (GRO).

Late registrations, which may occur for a variety of reasons, are not included in the figures.  The most common reason for a late registration of a death is that it is referred to the Coroner for further investigation.

In 2011, for example, an additional 578 deaths were registered in respect of previous years.  Of these, 25 were classified as suicide in the following years:

The crude (or unadjusted) death rate describes mortality in relation to the total population.  Expressed in deaths per 100,000 of population, it is calculated as the number of deaths recorded in the population for a given period divided by population in the same period and then multiplied by 100,000.

As most causes of death vary significantly with people’s age and sex, the use of standardised death rates improves comparability over time and between countries. The reason is that death rates can be measured independently of the age structure of populations in different times and countries (sex ratios usually are more stable).

Standardised death rates are calculated on the basis of the 'European Standard Population' revised by Eurostat in 2012 (and published in 2013).

The numbers of recorded suicides and crude rates classified by gender from 1950 to 2013 are provided in Annex 1.  Data for 2012 and 2013 are based on date of registration of death.

Data should be interpreted with care and as population changes, attitudes to death from self-harm, the introduction of the Form 104 in 1967 and it's revision in 1998, the Criminal Law (Suicide) Act 1993 and other factors would affect trends over time.

Scan the QR code below to view this release online or go to
http://www.cso.ie/en/releasesandpublications/er/ss/suicidestatistics2011/