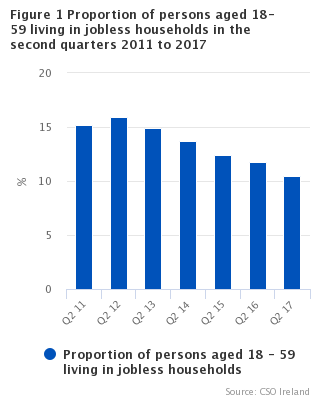 One and two person households together accounted for more than half (52.8%) of all the households in the State in Q2 2017, while 13% of households contained five or more persons. See Tables 2 and 3.

Family Units and Duration of Unemployment

Show Table 1 Proportion of persons in jobless households by NUTS2 and NUTS3 regions, age and gender

A two-stage sample design is used. A new sample was introduced in Q4 2012 following the 2011 Census of Population and an additional new sample also based on the 2011 Census of Population will be introduced incrementally from Q3 2016. The sample frame of households is clustered into blocks (small areas) with each block containing a minimum of 60 occupied households on the night of the 2011 Census of Population. In the case of the sample introduced in 2012 the sample frame is stratified using administrative county and population density while the sample introduced in 2016 is stratified using administrative county and the Pobal HP (Haase and Pratschke) Deprivation Index. In the first stage 1,300 blocks are selected using Probability Proportional to Size (PPS) sampling and in the second stage 20 households are selected using Simple Random Sampling (SRS). This ensures that each household in the sample frame has an equal probability of selection and results in a total quarterly sample of 26,000 households. The actual achieved sample varies over time depending on the level of response.

For the purpose of the data in this release it can be noted that an adult member of a family unit is either a lone parent or a member of a couple. Never married persons (regardless of age) living with a parent or parents are defined as children provided those persons are themselves not part of a separate family unit. In addition users should note that the adjustment factors assigned to each spouse within a family unit may differ.

A family unit itself consists of either:

2. a married couple and one or more of their never-married children, or

3. one parent and one or more of his or her never-married children, or

4. a couple living together (with never-married children, if any) who are not married to each other, where it is clear that the couple form a “de facto” family unit.

The Quarterly National Household Survey is the official source of data for the jobless household indicator.

Comparison to Census of Population results

The data in this release is not directly comparable to the results from the Census of Population. Both sources are collected in different ways and this can lead to differences in estimates between the two sources. In addition, as noted above, the QNHS is a voluntary sample survey, while the Census of Population is a mandatory survey of the entire population. In addition, the Census of Population is a self-completed paper questionnaire whereas a face to face interviewer asks the QNHS questions using computer-assisted personal interview (CAPI) and that may lead to differences in understanding and interpreting the questions.

Up to and including Q1 2006 the annual population estimates were calculated using the de facto definition of population (i.e. all persons present in the State). From Q2 2006 onwards a new concept of usual residence has been used, i.e. all persons usually resident and present in the state plus absent persons who are usually resident in Ireland but are temporarily away from home and outside the State.

Unemployed: Persons aged 15 to 74 who, in the week before the survey, were without work and available for work within the next two weeks, and had taken specific steps, in the preceding four weeks, to find work.

The duration of unemployment is the length of time since a person last had a job or began looking for work, whichever is more recent.  The long-term unemployment rate is the number of persons unemployed for one year or more expressed as a percentage of the total labour force aged 15 to 74 years.

In addition to natural changes in population, net migration has been a significant feature of population change in Ireland in recent years and net migration has also been most heavily concentrated in younger age groups. Evidence shows that migration is also most heavily concentrated in the 20-24 and 25-34 age groups. As a result of both natural decrease and net outward migration, the population of persons in the younger age groups has fallen and this should be borne in mind when considering the changes in the number of people in these age groups who are employed, unemployed and in the labour force.

The population concept of usual residence is used for the QNHS, i.e. all persons usually resident and present in the State plus absent persons who are usually resident in Ireland but are temporarily away from home and outside the State.

The final Census count was published on April 6 2017. The total for this usually resident population concept which was enumerated on Census Night, April 24 2016, was 4,739,597 persons, while the existing estimate for the usually resident population for April 2016 is 4,673,700 as detailed in the 2016 Population and Migration Estimates release. There is a difference, therefore, of just over 65,900 or 1.4% between the two figures.

The CSO is in the process of revising the population estimates for 2012 to 2016 based on this final Census count. Estimates of persons employed and unemployed will then be revised in line with the higher population totals when available. However, in terms of trends, the impacts would be expected to be relatively low as the population difference is introduced incrementally over the period.  In  the  case  of  rates (unemployment rate, employment rate, participation rate) these are likely to have a lower level of  difference  as  the  population  increase  would  be  reflected  both  in  the  denominator  and  the numerator.  In  the  case  of  the  unemployment  rate  for  example,  changes  in  both  the  numbers unemployed  and  the  numbers  in  the  labour  force  could  leave  unemployment  rates  relatively unchanged.

Once the revision work has been completed the CSO will issue an explanatory note on the subject along with the revised labour market estimates.

Effective from Q3 2017, the QNHS is being replaced by a new Labour Force Survey (LFS).This is part of a major Household Survey Development (HSD) project that the CSO has been engaged in over the past number of years with the aim of expanding the range of social statistics to meet new needs for information on households and persons. This new survey includes the introduction of Computer Assisted Telephone Interviewing (CATI), a redesigned questionnaire and enhancements to the survey methodology.

The first results from this new survey, which will be for Q3 2017, will be published before the end of January 2018. These will incorporate the revision of population estimates arising from the 2016 Census of Population along with a back-cast series of the existing data for the QNHS.

Scan the QR code below to view this release online or go to
http://www.cso.ie/en/releasesandpublications/er/qnhs-fu/qnhshouseholdsandfamilyunitsq22017/