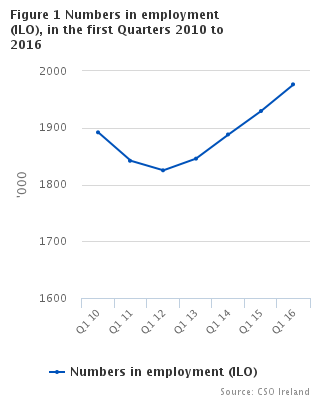 In the year to Q1 2016, the largest rate of increase in permanent employees was seen in the Managers, directors and senior officials occupational group (+8.5% or +8,000). See Table 16.

Show Table 15 Employees aged 15 years and over in employment (ILO) classified by NACE Rev. 2 Economic Sector and permanency of employment

The number of valid responding households in Q1 2016, the most recent quarter for which data is included in this release, was 15,384.

Up to and including Q1 2006 the annual population estimates were calculated using the de facto definition of population (i.e. all persons present in the state). Since Q2 2006 a new concept of usual residence has been used, i.e. all persons usually resident and present in the state plus absent persons who are usually resident in Ireland but are temporarily away from home and outside the State.

Unemployed: Persons who, in the week before the survey, were without work and available for work within the next two weeks, and had taken specific steps, in the preceding four weeks, to find work. It should be noted that as per Eurostat's operational implementation, the upper age limit for classifying  a person as unemployed is 74 years.

The data presented in this release are related to persons classified as being in employment only.

The QNHS sectoral employment figures are based on the EU NACE Rev. 2 (Nomenclature generale des activites economique dans les Communautes europeennes) classification as defined in Council Regulation (EC) no 1893/2006. Fourteen NACE sub-categories are distinguished in Table 2a of this release. From Q1 2009 NACE Rev. 2 has been adopted as the primary classification of industrial sectors for use in QNHS outputs. From Q4 1997 to Q4 2008 the NACE Rev. 1.1 classification had been in use.

NACE Rev. 2 classification is more detailed than the NACE Rev. 1.1 classification. In particular more sections are now identified for services activities with the aim of better capturing economic activity within services. In cases where there is a direct one to one correspondence (e.g. section H ‘Hotels and restaurants’ in NACE Rev. 1.1 directly corresponds to section I ‘Accommodation and food service activities’ sector in NACE Rev. 2) then the two different series can be expected to be broadly comparable.

However, the series will not be exactly the same, as the process of applying NACE Rev. 2 involved a very detailed recoding process whereby the new NACE classification was applied to each record in each quarter.  The detailed nature of this process means it should be expected that even in the case of a one to one correspondence between a NACE Rev. 2 and NACE Rev. 1.1 section; minor differences in the level of the estimates may be seen.

The previously used classification for publication purposes in Ireland was UK SOC1990 and this cannot be directly compared to the new UK SOC2010 classification as all occupations have been reclassified accordingly.  This newer classification reflects the evolution over a period of time of certain occupational areas which were developing rapidly, both in terms of their scale and the complexity of work organisation.  One particular example which highlights the impact of these changes on published results is the reclassifying of farmers from the major occupation grouping of ‘Managers and administrators’ in SOC1990 to the major occupation grouping of ‘Skilled trades’ in SOC2010.

Scan the QR code below to view this release online or go to
http://www.cso.ie/en/releasesandpublications/er/qnhs-es/qnhsemploymentseriesq12016/