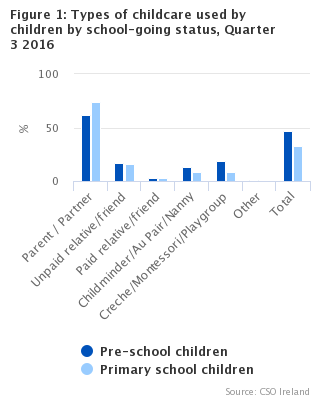 The average amount spent per hour on paid non-parental childcare for pre-school children is €4.20, while this figure is higher for primary school children, at €5.30 per hour. The region with the highest cost per hour for pre-school children is Dublin, at €4.90. It is also the region with the highest costs for child-minder/au pair/nanny (€5.20) and crèche/Montessori/playgroup/after-school facility (€5.70).  The Mid-West and South-East are the regions with the lowest hourly cost (€3.50 per hour). See Table 6.

The average household weekly expenditure on paid non-parental childcare is €155.60. This is an increase from 2007, when the corresponding figure was €123.20. It should be noted that the Early Childhood Care and Education (ECCE) scheme was introduced in January 2010. See Background Notes for further details on the Early Childhood Care and Education scheme.

Of children aged between 3 and 6, 52% availed of the ECCE scheme in the previous twelve months. It is highest in the South-East (61%) and lowest in the Midlands (44%). In very disadvantaged areas 48% availed of the scheme, compared with 56% of those in very affluent areas. See Table 8 and Figure 4.

Of those children that did not avail of the ECCE scheme in the previous twelve months, 12% of the children’s parents did not wish to send the child to childcare, while 2% advised that there was no registered facility in their area and 1% were not aware of the scheme. See Table 9.

When presented with the statement “I have access to affordable childcare in my community”, 28% of households strongly agreed or agreed. The Midlands has the highest level of agreement (41%) and the Mid-East has the lowest level (19%). See Table 12 and Figure 7.

Show Table 5: Use of non-parental childcare by school-going status, family type, educational attainment of mother, and level of affluence, Quarter 3 2016

Show Table 8: Percentage of children that have availed of the ECCE scheme, by region and level of affluence, Quarter 3 2016

Show Table 9: Reasons for not availing of the ECCE scheme, Quarter 3 2016

Show Table 10: Type of alternative childcare desired by households for their children, by school-going status, Quarter 3 2016

Show Table 11: Agreement with the statement "I have access to high quality childcare in my community", by region and level of affluence, Quarter 3 2016

Show Table 12: Agreement with the statement "I have access to affordable childcare in my community", by region and level of affluence, Quarter 3 2016

A module on the topic of childcare was included in the Quarterly National Household Survey (QNHS) in the third quarter of 2016 (July – September). The module covered topics including childcare usage and childcare costs.

The questions on childcare were included in the Quarterly National Household Survey (QNHS) in the three months from July to September 2016. The data was collected by Computer-Assisted Personal Interviews (CAPI), a face-to face form of interviewing.

While the primary purpose of the QNHS is to collect information on employment and unemployment, it is also used to data through modules on social topics of interest.

‘Childcare’ refers to types of childcare arrangements usually made by parents/guardians on a regular weekly basis during the working day.

‘Pre-school’ refers to children aged up to five years who are not attending primary school.

‘Primary school’ refers to children aged between 4 and 12 who are attending primary school.

‘Early Childhood Care and Education Scheme’ refers to a scheme introduced by the Department of Children and Youth Affairs which provides children aged between 3 years and 5 and a half years with one year of childcare, covering three hours per day, five days per week. Please see the following website for further details https://www.dcya.gov.ie/viewdoc.asp?DocID=1143

In 2016, the childcare types listed in the questionnaire were:

In 2007, the childcare types listed in the questionnaire were:

The QNHS grossing procedure aligns the distribution of persons covered in the survey with the independently determined population estimates at the level of sex, five-year age group and region from the Census of Population.

The classification is derived from a single question and refers to educational standards that have been attained and can be compared in some measurable way. Questions on educational attainment are included in the core QNHS on an ongoing basis.

The Pobal Haase-Pratschke Deprivation Index is used to analyse Irish Health Survey questionnaire responses experienced by individuals. The Index uses Census data to measure levels of disadvantage or affluence in a particular geographical area. More detailed information on the index can be found here: https://www.pobal.ie/Pages/New-Measures.aspx

The Central Statistics Office wishes to thank the participating households for their co-operation in agreeing to take part in the survey, and for facilitating the collection of the relevant data.

Scan the QR code below to view this release online or go to
http://www.cso.ie/en/releasesandpublications/er/q-chi/qnhschildcarequarter32016/