Dwelling units approved down 16.6% in year 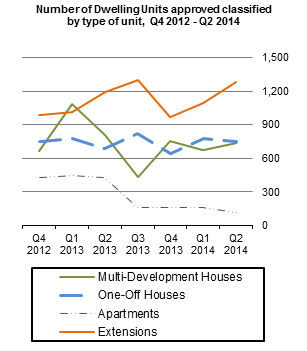 go to full release
In the second quarter of 2014, planning permissions were granted for 1,606 dwelling units, compared with 1,926 units for the same period in 2013, a decrease of 16.6%.
The second quarter figures also show that:

This series is also available using the interactive tables in Database Direct on www.cso.ie.

Scan the QR code below to view this release online or go to
http://www.cso.ie/en/releasesandpublications/er/pp/planningpermissionsquarter22014/