Dwelling units approved up 50.4% in year 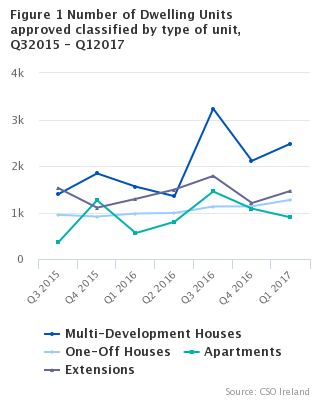 As the figures for floor area have been rounded there may be slight discrepancies between the sum of the constituent items and the totals shown. Estimates are included where complete details of floor area size are not available.

The following was noted in the March 1973 Statistical Bulletin.

“Inaugurating this series, it was hoped primarily that it would prove in time to be a valid measure of the work about to flow into the building sector of the economy, and that it could, in fact, be related either directly or indirectly to a measure of subsequent activity in this sector. A detailed analysis of the data presently available suggests that this is not the case. No significant correlation can be found between for example the number of dwelling units planned in any period (monthly or quarterly) and any subsequent rate of completions of dwellings.  This is perhaps not too surprising when individual permissions  can relate to large numbers of individual units (up to 600 or so).  Clearly it could take up to two years or more for an “Estate” of this size to be completed. Therefore the analysis was repeated excluding the subset of permissions involving large numbers of units but the results were still not correlated significantly. This can arise from causes such as the fact that a person obtaining planning permission may not intend acting upon this permission for a considerable time, if at all. However the time scale of available planning data is still relatively short for this type of analysis, and it cannot be finally said yet that the planning permission does not correlate in any measurable way with subsequent building activity.”

Scan the QR code below to view this release online or go to
http://www.cso.ie/en/releasesandpublications/er/pp/planningpermissionsquarter12017/