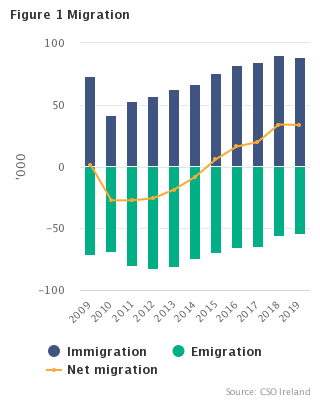 The combined effect of positive net migration and sustained natural increase resulted in an overall increase in the population of 64,500 for the second consecutive year, bringing the population estimate to 4.92 million in April 2019.  See table 1.

Other main features of the 2019 figures are:

Show Table 5 Estimated Migration (aged 15 and over) classified by Sex and Education Attainment, 2013 - 2019

The reference period for the population estimates is mid-April of each year. The migration flows are in respect of the twelve months to mid-April of the corresponding years, as are the births and deaths. The usually resident population classified by age and sex for 2016 are taken from the Census of Population.

The principal source of information for the estimation of the gross annual migration flows is the Irish Labour Force Survey (LFS), which also provides the basis for the classification of the flows by sex, age group, origin/destination and nationality.

The annual population estimates for mid-April are calculated by trending forwards the previous Census of Population data. For example, the base population data for estimating the April 2017 figure was the number of males and females in each region by single year of age and nationality as established by the 2016 Census. From this base, each person was aged by one year, births for the period were added and deaths were subtracted. The estimated number of immigrants was then added and the number of emigrants was subtracted. Allowance was also made for estimated inter-regional migration in arriving at the final 2017 figures.

The General Registration Office (GRO) supplies registered data for births and deaths and these are typically added to the population file quarterly in arrears (N+1).

The Irish Naturalization and Immigration Service provide annual data for persons who acquire Irish citizenship. The availability of the citizenship data for year N is N+2 and so estimates for 2018 and subsequent years will be achieved by trending forward the rates noted for the most recent year available.  Therefore, for the purpose of the 2019 release the 2017 distribution of citizenship acquisitions was applied.

The Nomenclature of Territorial Units for Statistics (NUTS) were created by Eurostat in order to define territorial units for the production of regional statistics across the European Union. In 2003 the NUTS classification was established within a legal framework (Regulation (EC) No 1059/2003).

As the administrative territorial breakdown of EU Member States is the basis of the NUTS classification, changes made under the 2014 Local Government Act prompted a revision to the Irish NUTS 2 and NUTS 3 Regions. These changes included the amalgamation of the local authorities of Tipperary North and South, Limerick City and County Councils and Waterford City and County Councils. In addition three Regional Assemblies were established (Northern & Western, Southern, Eastern & Midland).

The main changes at NUTS 3 level are the transfer of South Tipperary from the South-East into the Mid-West NUTS 3 region and the movement of Louth from the Border to the Mid-East NUTS 3 Region. There are now three NUTS 2 Regions which correspond to the Regional Assemblies established in the 2014 Local Government Act and are groupings of the new NUTS 3 Regions. The revisions made to the NUTS boundaries have been given legal status under Commission Regulation (EU) 2016/2066. The new NUTS 2 and NUTS 3 structure and classification are displayed in the table below:

Scan the QR code below to view this release online or go to
http://www.cso.ie/en/releasesandpublications/er/pme/populationandmigrationestimatesapril2019/