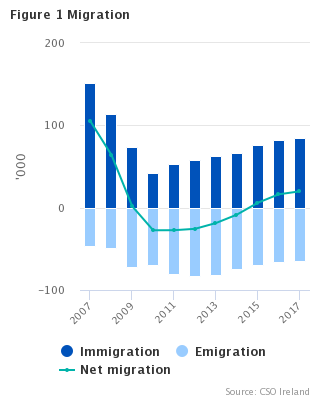 Irish nationals continue to experience net outward migration, although at a much lower level than in the previous year, falling from -8,800 to -3,400, while net inward migration among non-Irish nationals decreased from 25,000 to 23,200.  See table 2.

The combined effect of natural increase and positive net migration resulted in an overall increase in the population of 52,900 bringing the population estimate to 4.79 million in April 2017.  See table 1.

Other main features of the 2017 figures are:

Show Table 5 Estimated Migration (aged 15 and over) classified by Sex and Education Attainment, 2011 - 2017

The reference period for the population estimates is mid-April of the years shown, while the migration flows are in respect of the twelve months to mid-April of the corresponding years, as are the births and deaths. The usually resident population classified by age and sex for the years 2011 and 2016 are taken from the Census of Population held in those years. The population and migration estimates for the 2012 - 2016 period have been revised in the light of the 2016 Census results.

The annual population estimates for mid-April in this release were calculated by trending forwards the previous Census of Population data. For example, the base population data for estimating the April 2017 figure was the number of males and females in each region by single year of age and nationality as established by the 2016 Census. From this base, each person was aged by one year, births for the period were added and deaths were subtracted. The estimated number of immigrants was then added and the number of emigrants was subtracted. Allowance was also made for estimated inter-regional migration in arriving at the final 2017 figures.

The change in the population between successive Censuses reflects not only the effect of births and deaths but also all movements of persons internally between regions and into and out of the State between both dates.

The components of population change were examined and analysed as part of the revisions process.

The General Registration Office (GRO) supplies registered data for births and deaths and these are typically added to the population file quarterly in arrears (N+1). As part of the revisions process births and deaths were assigned to the appropriate registration period, as a result of this the natural increase for the 2012 - 2016 period was revised downwards by 700 persons when taken into account.

After the adjustment to births and deaths, the residual provides a measure of the overall net migration (i.e. the difference between inward and outward flows) for the five year inter-censal period.

A detailed analysis of the Personal Public Service (PPS) numbers allocated to non-Irish nationals in a given year which still had either employment (P35) or social welfare activity the following year, combined with information on the number of work permits issued to Irish nationals in a given year, suggests that immigration was underestimated and emigration was overestimated over the period. Therefore inward and outward flows have been adjusted accordingly. Immigration has been revised upwards by 26,900 persons while emigration has been revised downwards by 39,700 persons.

Revisions to the immigration data also took account of the 2016 Census results on one year inflows and the recorded year of arrival of immigrants.

By examining a person's usual residence at the time of a census and one year previously it is possible to determine inter-regional migration patterns. Following each Census a new internal migration matrix is produced and used to measure inter-censal internal migration. Internal migration for the year to April 2017 has been updated to take account of the Census 2016 results.

The Irish Naturalization and Immigration Service provide annual data for persons who acquire Irish citizenship. While some 94,000 citizenship certificates were issued for the period 2012 - 2016 inclusive, when usual residence and calendar effects were accounted for, some 93,000 of these citizenship/nationality acquisitions were relevant for the purpose of this release.

For the years 2012 - 2016 citizenships were allocated to the year in which the citizenship certificate was issued. The availability of the citizenship data for year N is N+1 and so estimates for 2017 and subsequent years will be achieved by trending forward the rates noted for the most recent year available.

The regional classifications in this release are based on the NUTS (Nomenclature of Territorial Units) classification used by Eurostat. The NUTS3 regions correspond to the eight Regional Authorities established under the Local Government Act, 1991 (Regional Authorities) (Establishment) Order, 1993, which came into operation on 1 January 1994.  The NUTS2 regions, which were proposed by Government and agreed by Eurostat in 1999, are groupings of the NUTS3 regions.  The composition of the regions is set out below

Scan the QR code below to view this release online or go to
http://www.cso.ie/en/releasesandpublications/er/pme/populationandmigrationestimatesapril2017/