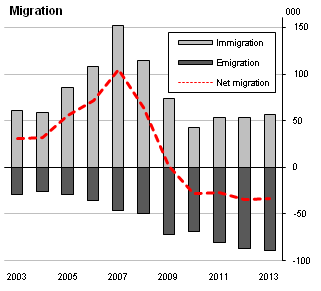 The combined effect of natural increase and negative net migration resulted in an overall small increase in the population of 7,700 bringing the population estimate to 4.59 million in April 2013. (Table 1)

Other main features of the 2013 figures are:

This release provides for the first time estimates of migration to and from Australia and Canada as individual countries of origin/destination. This is part of the ongoing work by the CSO to improve data in this area, which in recent years has included new data on the nationality of emigrants (Table 2) and an estimate of the total population by nationality (Table 7).

Scan the QR code below to view this release online or go to
http://www.cso.ie/en/releasesandpublications/er/pme/populationandmigrationestimatesapril2013/