Trips to Ireland increased by 8.8% for the period September - November 2013 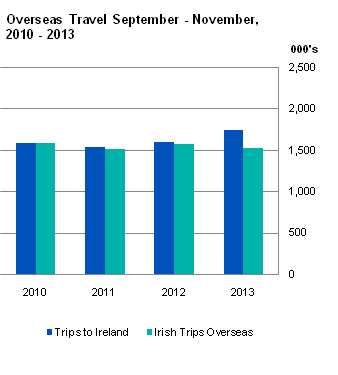 The total number of trips to Ireland increased by 7.1% for the period January - November 2013 when compared with the same period in 2012.  See tables 3 and 4.

The total number of trips (Irish residents’ trips overseas plus trips to Ireland) in the period September to November 2013 increased by 3.0% to 3,256,100 when compared with the same period twelve months earlier.  For the period September to November 2012, there was an annual increase of 4.0% in the total number of trips taken when compared to the previous corresponding period.  See tables 1 and 2.

Show Table 5 Overseas Trips to Ireland by Area of Residence for the period September - November, 2010 - 2013

The sample size for the Overseas Travel release in respect of the three month period September - November 2013 was just over 95,900 passengers.

Seasonally adjusted quarterly data is available in Table 8.  Trip numbers are subject to a high degree of seasonality.  These seasonal fluctuations do not affect annual comparisons but they do affect monthly or quarterly comparisons.  Typically trips are at their highest during the summer months, although there are also clear peaks around Christmas and Easter.  To facilitate interpretation of underlying trends, trip numbers are adjusted to remove these seasonal trends.  Seasonal adjustment is conducted using the direct seasonal adjustment approach.  Under this approach each individual series is independently adjusted each month, e.g. aggregate series are adjusted without reference to the component series.  Seasonal adjustment models are developed for each series based on unadjusted data from January 2000 to the current period.  These models are then applied to the entire series.  Seasonal factors are updated each quarter.

The effect of sampling error is greater for small estimates and may, in particular, make it more difficult to compare figures for different time periods.  Standard error estimates in respect of the major Area of Residence categories for Quarter 1 to Quarter 3 2013 calendar quarters are presented in the following tables.

The CSO "Airport Pairings" database contains information on every direct flight in and out of the nine Irish airports on a monthly basis.  November 2013 passenger figures will be added to the database from early February 2014.  For details please go to http://cso.ie/shorturl.aspx/15

Transfer passengers or 'connecting passengers' are also defined as those who make a stop at an airport without any particular purpose other than being en route to another destination.  However, unlike transits, transfer passengers disembark the aircraft and pass through the airport en route to their connecting flight.  Such passengers may be surveyed for the Country of Residence Survey and are thus included in the estimates for trips.

Easter falls each year on a Sunday between March 22nd and April 25th, inclusively.  In 2013 Easter Sunday fell on March 31st, while in 2012 it fell on April 8th.  Trip numbers each year are greatly influenced by when Easter falls.

Scan the QR code below to view this release online or go to
http://www.cso.ie/en/releasesandpublications/er/ot/overseastravelseptember-november2013/