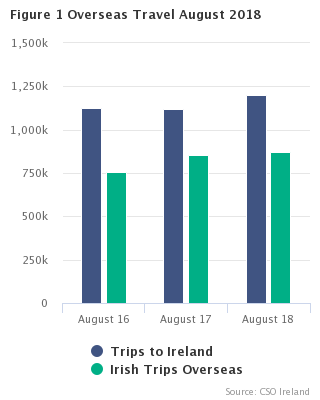 The total number of trips (Irish residents’ trips overseas plus trips to Ireland) in August 2018 increased by 5.0% to 2,072,500 when compared to twelve months earlier.  See tables 1 and 2.

Show Table 7 Overseas Trips to Ireland by Area of Residence by calendar quarter, 2016 - 2018

The sample size for the Overseas Travel release in respect of August 2018 was just below 56,600 passengers.

Scan the QR code below to view this release online or go to
http://www.cso.ie/en/releasesandpublications/er/ot/overseastravelaugust2018/