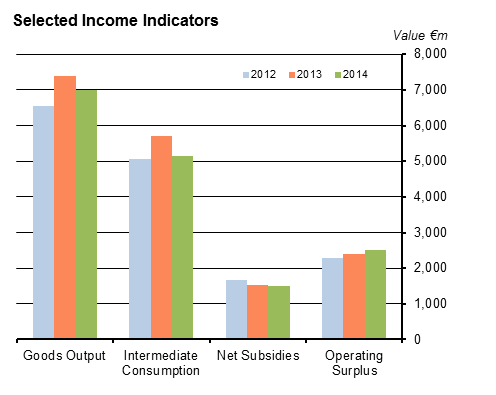 These figures are based on the final annual data and update preliminary estimates published by the CSO in February 2015.

This release contains final estimates of agricultural accounts for the reference year 2014. Three sets of estimates are prepared in each 12-month period. The first or Advance estimate is generally released in early December of the reference year, before the end of the reference year. This is based on the data available at the time, which is not fully complete. The Advance estimate is updated in February of the following year, when the Preliminary estimate is published.  This incorporates all additional up-to-date information that has become available by that time. In June, the Final estimate of the agricultural accounts is prepared, based on the complete set of data. The methodology used for producing accounts for agriculture is based on the European System of Accounts (ESA 2010). For details of methodology and description of data sources please see the “Methodology” link.

Subsidies and taxes on agricultural products are those paid or levied per unit of a good or service produced or exported. Examples of subsidies on products are the suckler cow premium and the special beef premium. The bovine disease eradication levy is an example of a tax on products.

To calculate the volume indices all items of output and input are valued at constant base year prices, i.e. by applying base year prices to current year quantities. The volume index for 2014 may then be calculated by comparing the value in 2014 at average 2010 prices to the value in 2010 at average 2010 prices. Volume indices allow one to estimate the changes in production and expenditure, as if the prices did not change since the base year.  This separates the effects of volume and price changes on output, input and income.

This release introduces some changes in the methodology for estimating the value of the output of forage plants and to the method of calculating the expenditure on intermediate consumption by agricultural holdings. The details of the changes are outlined below.

Previously the price of silage, hay and straw was linked to the price of cereals. The new methodology uses prices obtained directly from the results of the National Farm Survey (NFS) run by Teagasc in order to obtain a more precise estimate.

Certain items of intermediate consumption such as energy, maintenance and repairs and veterinary expenses are estimated by using results of the NFS. The new methodology continues to use NFS results but at a considerably more detailed level than previously, taking into account the type and size of the agricultural holdings. This allows for more precise estimates of farm input costs, especially for farms with small standard output, i.e. less than €8,000.

The new methodology has been applied in producing the Final estimates for the reference year 2014. The results for the years 2010 – 2013 has also been revised for comparability.

Scan the QR code below to view this release online or go to
http://www.cso.ie/en/releasesandpublications/er/oiiaf/outputinputandincomeinagriculture-finalestimate2014/