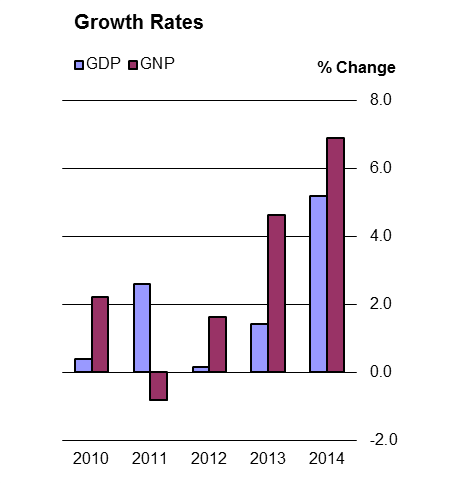 Gross Domestic Product (GDP) increased by 5.2% over the same period. The present release is based on more complete and up to date data than that which was available when the Q4 2014 estimates were published in March 2015. The 2013/2014 volume changes indicated at that stage were GDP (4.8%) and GNP (5.2%).

Four of the five main sectors distinguished in Table 4 showed positive growth in 2014. The Agriculture, forestry and fishing sector advanced by 17.6%, while three of the other main sectors had annual increases ranging from 4.2% to 7.1%. Public administration and defence shrank, for the sixth year in succession, in 2014 by 0.3%.

On the expenditure side of the accounts exports grew by 12.1% between 2013 and 2014 (Table 6, at constant prices). Imports increased also, by 14.7%, over the same period. The results for gross fixed capital formation now include additional investment for aircraft leasing companies (see note below). Its growth rate in 2014 from the higher level was 14.3%. Personal consumption expenditure increased by 2.0% while Government net current expenditure rose by 4.6%.

Show Table 21 Receipts and Expenditure of Central and Local Government

This release contains the first detailed results of the main National Accounts aggregates and their components for 2014. It includes revisions for all years from 2009 to 2013. The estimates for the most recent years, especially 2014, are based on provisional indicators for the different aggregates and are subject to revision. (A preliminary estimate of the 2014 outturn was already provided in the quarterly accounts release for Q4).

The results for the economy continue to be shown for five sectors whose titles remain the same as in previous releases and publications. However the contents of the sectors conform to the NACE Rev. 2 system.

One of the main changes resulting from the NACE Rev. 2 classification is that the “Publishing” industry has been reclassified from “Industry” to the sector “Distribution, transport, software and communication”. This latter sector now also contains the “Hotels and catering sector” which had previously been included in the “Other Services” sector. The “Software” industry was also included in “Other Services” in the old National Classification but is now part of the new category “Distribution, transport, software and communication” in the NACE Rev 2 classification. The overall effect on the tables has been that the “Distribution, transport, software and communication” sector accounts now for a much larger share of the total GVA of the economy than in the old national system while the sectors classified as “Industry” and “Other Services” account for a lower share.

In tables 2 to 4 the following is the correspondence with the relevant sections of Nace Rev. 2:

At constant prices, two measures (output and expenditure) are used. These measures are being produced using annual chain linked indices. On the output side, for each pair of successive years, the volume growth measures at a detailed level are weighted together using value added weights of the first year. Similarly, on the expenditure side, annual growth estimates are weighted by previous year expenditure weights. The average of the two measures is the official growth measure used. The change over a period of years is then calculated by linking together the annual changes. The estimates in this release are referenced to 2013 values.

The estimates in this release are based on more detailed and more recent data than that available at the time of publishing the quarterly estimates for 2014. In particular they incorporate revisions to the Balance of Payments figures for recent years and revised unit value indices for merchandise trade.

is equal to Gross Value Added at factor cost plus net factor income from the rest of the world and represents the total of all payments for productive services accruing to the permanent residents of the country. Some income accrues to Irish residents as a result of economic activity abroad or property held abroad while some income arising in the state is paid to non-residents.

is equal to Gross National Product at market prices plus EU subsidies less EU taxes.  This is more commonly described as being equal to Gross Domestic Product plus net primary incomes from abroad.

Scan the QR code below to view this release online or go to
http://www.cso.ie/en/releasesandpublications/er/nie/nationalincomeandexpenditureannualresults2014/