Number of new dwelling completions up 23.4% in year 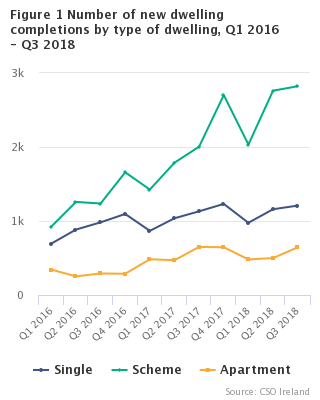 The ESB domestic connections dataset provides information on the type of connection and whether it is in an urban or rural area. Figure 2 below shows that in Q3 2018, more than three quarters of all new dwelling completions (78.7%) are urban with 21.3% being in rural areas compared to Q3 2017 when 75.1% were urban and 24.9% rural. See Table 2.

'Dublin 15' the Eircode area with the most new dwelling completions

Domestic ESB connections in Q3 2018 totalled 5,739, an increase of 15% on Q3 2017. The ESB domestic connections series shows a comparable trend to the NDC series compiled by the CSO as shown in Figure 4. However, there is a significant difference in volume between the two series. The starting point for the NDC series is the ESB domestic connections dataset, with adjustments made to account for previously finished houses in unfinished housing developments (UFHDs), reconnections and non-dwellings as shown in Figure 5 and Table 4.

The number of previously finished dwellings in unfinished housing developments (UFHDs) dropped from 253 in Q3 2017 to 187 in Q3 2018, a decline of 26.1%. From the peak in Q3 2014 when 716 UFHDs were connected to the ESB Network, UFHDs have decreased by 73.9%. A property which is reconnected to the ESB network after having been disconnected for more than two years, is assigned a new MPRN and is therefore included in the ESB connections datasets. These reconnections decreased by 10.3% to stand at 654 in Q3 2018. The number of non-dwellings has increased slightly by 0.9%. See Figure 5 and Table 4.

Scan the QR code below to view this release online or go to
http://www.cso.ie/en/releasesandpublications/er/ndc/newdwellingcompletionsq32018/