This release was compiled during the COVID-19 pandemic. The number of new domestic ESBN connections undertaken has been impacted in different ways since March 2020 from the varying restrictions associated with the pandemic. To show the effect of the pandemic and related restrictions over this period - and before - on the New Dwelling Completions, additional monthly analysis has been included for this quarter's release. 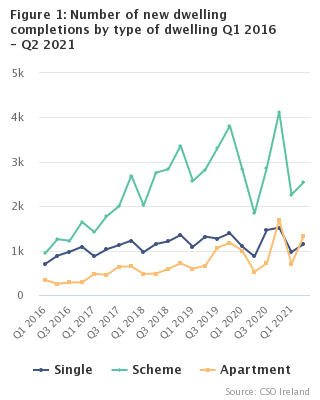 The recovery of the construction sector since the relaxation of restrictions associated with the COVID-19 pandemic is evident in the new dwelling completion figures this quarter, particularly relative to quarter 2 in 2020 when the initial phase of restrictions were in place. There were 5,021 new dwelling completions in Q2 2021, which is 55.5% greater than the 3,229 completions in the second quarter of 2020. The total figure for this quarter is also 4.6% greater than the 4,802 completions in Q2 2019.

Over two-thirds of apartment completions in Dublin in Q2 2021

There are still some differences in volume between the two series. The starting point for the NDC series is the ESB domestic connections dataset, with adjustments made to account for previously finished houses in unfinished housing developments (UFHDs), reconnections and non-dwellings as shown in Figure 5 and Table 4.

Reconnections continue to account for about 10% of ESB connections

Highest number of reconnections in Mid-East region in Q2 2021

Historically, the number of new dwellings built in Ireland, as published by the DHPLG, was based on the number of connections to the ESB Network. However, in recent years it became apparent that this series was overestimating the levels of new dwelling construction in Ireland. The New Dwelling Completions series will look to replace this and other available indicators of housing activity in Ireland. This series will include information on dwelling type, urban/rural location, activity by Local Authority and by Eircode Routing Key (and now Local Electoral Area). It will continue to be based on domestic ESB connections but will correct for over-coverage by using additional information from ESB Networks and incorporating data from other sources. It also includes data on the number of reconnections and on houses from unfinished housing developments that are coming back into use. This will provide policy-makers with a valuable insight into the number of new dwellings available for occupation in the quarterly period concerned and also show data on the numbers of dwellings being constructed.

The New Dwelling Completions data series is based on the number of new dwellings connected by the ESB Network to the electricity supply and may not accord precisely with geographical boundaries. The NDC series is split into local authorities, Eircode Routing Keys and Local Electoral Areas based on the information of the substation rather than the exact location of the dwelling. As Eircode becomes available as the unique identifier, it will replace the source of identifying the location of a new dwelling.

The primary data source used for the New Dwellings Completions series is the ESB domestic connections dataset where the date that the connection is energized determines the date of completion. It is accepted that the ESB domestic connections dataset overestimates new dwellings and the CSO has adjusted for this overcount by using additional information from the ESB and other data sources. The ESB domestic connections dataset is matched by the CSO to Building Energy Rating (BER) data, compiled by the Sustainable Energy Authority Ireland (SEAI). Under the Statutory Instrument (S.I.) No. 243 of 2012, all residential property for sale must disclose their BER assessment (with some very minor exceptions). The BER includes detailed information on the type of dwelling, the type of certificate (Provisional, Final, Existing) as well as the date of assessment and construction. As the collection, storage and maintenance of Eircode improve, other data sources can be further consulted to improve the accuracy of the series.

While the time lag between connection to the ESB network and BER assessment can explain missing BER certificates, the data in Table 7 indicates that there are additional factors at play for single dwellings and apartments.

The low match rate for single dwellings is due to the large number of self builds where dwellings are not intended for sale or rent, similarly, the low match rate for apartments can be explained by dwellings not intended for sale. These include conversions from single dwellings as well as social housing and developments in the build-to-rent sector. Such developments will often have a range of provisional BER certificates or a partial number of BERs for the development without having a final BER for all properties.

Scan the QR code below to view this release online or go to
http://www.cso.ie/en/releasesandpublications/er/ndc/newdwellingcompletionsq22021/