Schools and colleges are the most energy efficient buildings 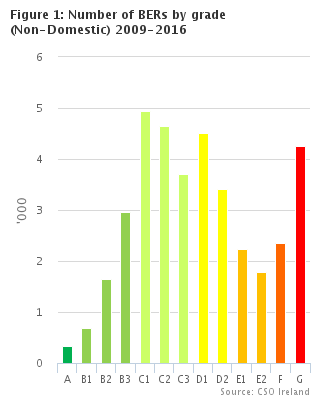 22% of schools and colleges that have received a non-domestic energy performance assessment were awarded an “A” rating compared with an overall average for all assessed buildings of 1% (see Table 3). In contrast a high proportion of “G” ratings were awarded to: Workshops and maintenance depots (19%); Warehouses (14%); Hospitals and primary health care buildings (13%); Retail units (12%); and Office buildings (12%). At an overall level, 35% of buildings received a “C” rating with a further 21% receiving a “D” rating.

Kilkenny at 19% and Sligo at 18% had the highest proportion of “G” rated buildings (see Table 4).

The European Union Energy Performance of Buildings Directive (EPBD) contains a range of provisions to improve the energy performance of new and existing buildings. The EPBD obliges specific forms of information and advice on energy performance to be provided to building purchasers, tenants and users for consideration in property transactions. A Building Energy Rating (BER) is an indication of the energy performance of a building represented in units of kWh/m2/year. A BER is based on the characteristics of major components of the building. The BER certificate indicates the annual primary energy usage and carbon dioxide emissions associated with the provision of space heating, water heating, ventilation, lighting, and associated pumps and fans. The average annual primary energy use figures and carbon dioxide emissions are not based on actual energy use and emissions data.

These Background notes provide a very general overview together with some specific information on the detailed tables in the release. The SEAI website should be consulted for detailed information on the non-domestic energy assessment procedure (NEAP), see http://www.seai.ie/Your_Building/BER/Non_Domestic_buildings/Non_domestic_Energy_Assessment_Procedure_NEAP_/

The figures in this release will be updated on a quarterly basis. Changes to data for the previous quarters will arise mainly from some buildings having another BER audit undertaken and the previous certificate being marked as expired. The difference in the number of BER certificates included in Tables 1 and 2 gives an indication of the number of buildings that have had more than one BER audit undertaken.

Full site surveys have to be carried out for New-final and Existing building assessments. New-provisional ratings do not require a site survey as the assessment is done based on design stage plans – new provisional ratings have been excluded from this release. Some buildings are excluded from the EPBD requirements: national monuments; protected structures; places of worship; temporary buildings; industrial and agricultural buildings not intended for occupancy and below a specified installed heating capacity; and buildings with a total useful floor area of less than 50 square metres. Short-term lettings are not exempt.

The data have not been adjusted to represent all non-domestic buildings in the State and hence the tables only represents buildings that have been assessed.

The BER rating scale is divided into categories from G (largest primary energy usage) to an A1 rating (lowest primary energy usage). Energy consumption is expressed in kWh per square metre of floor area of the building per year (kWh/m2/year) and CO2 emissions are expressed in kilograms of carbon dioxide per square metre per annum. For the purposes of this release A1, A2, and A3 have been combined because of the small number of Certificates in these categories. The certificate is valid for 10 years unless changes are made to the building.

Table 1 presents the number of BERs published by month since January 2009. A premises that has had BERs conducted in different years is included in each year. This table gives an overview of the number of BER assessments being performed each month.

Tables 2-12 only include the latest BER published for each building i.e. the BER is on the public register and is not expired - the number is lower than the total in Table 1 because expired and replaced certificates have been excluded.

Table 2 shows the number of BER certificates by energy rating and year.

Table 3 classifies the number of BER certificates by energy rating and building type. This relates to the current building use and it is displayed on the BER certificate. Some building types have been combined for the purposes of this release e.g. schools and colleges.

Scan the QR code below to view this release online or go to
http://www.cso.ie/en/releasesandpublications/er/ndber/non-domesticbuildingenergyratingsq12016/