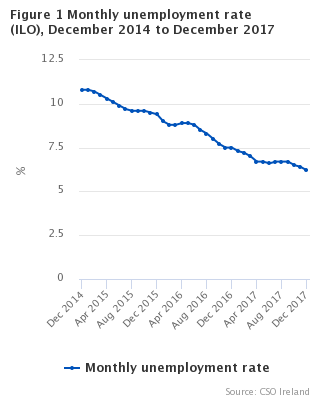 The CSO launched the new Labour Force Survey (LFS) with the publication of data for Q3 2017. To ensure that the historic Quarterly National Household Survey (QNHS) series is comparable with this new survey, adjustments have been made to this QNHS data from Q1 1998 to Q2 2017. The adjustments are based on a comparison of QNHS and LFS data from a parallel run undertaken at the beginning of 2017.

This adjusted QNHS data is then used to provide benchmark estimates of employment and unemployment for each quarter since the beginning of 1998 until the second quarter of 2017 while the new LFS is used to provide benchmarks from Q3 2017. These quarterly benchmark estimates are then used to compile monthly data using the Proportional Denton method. The main characteristic of this method is that the monthly Live Register series is used as an indicator to disaggregate the quarterly unemployment series into a monthly series in such a way as to minimise the differences between two consecutive months. It also ensures that the average of three months in a particular calendar quarter is equal to the corresponding quarterly estimate.

For months where the quarterly unemployment data is not yet available, the ratio of the LFS monthly estimate to the Live Register monthly estimate (i.e. the benchmark to indicator ratio) is forecast forward in order to extrapolate a monthly LFS estimate. The monthly series is revised each quarter when the latest quarterly data becomes available. This approach adheres to agreed international practice.

Benchmark LFS data for Q3 2017 which was not available at the time of publication of monthly estimates for November 2017 is also now available and has therefore been used to calculate the estimates in this release.

In addition, the benchmarks used in this December 2017 monthly unemployment release also take account of the new population estimates arising from the Census of Population 2016.

The adjustments have resulted in changes to the absolute volumes and rates previously published but the underlying trend is largely unchanged.

The impact of the adjustments applied as a result of finalising the adjustments to the Quarterly National Household Survey (QNHS) to take account of the new Labour Force Survey (LFS), the availability of final Q3 2017 benchmark data together with the impact of the Census revisions is illustrated below for all persons aged 15-74.

The full scale of these revisions for recent months is shown in the table below.

To correct for typical seasonal patterns, the data series included have been concurrently seasonally adjusted. This seasonal adjustment is completed by applying the X-12-ARIMA model, developed by the U.S. Census Bureau. In the case of these monthly unemployment estimates, seasonal adjustment is conducted using the indirect approach, where each individual series is independently adjusted.  To preserve consistency between the individual and aggregate series, the series for gender, age group and total monthly unemployed are then created from these component series. The series for monthly unemployment rates are likewise created from these component series.

Scan the QR code below to view this release online or go to
http://www.cso.ie/en/releasesandpublications/er/mue/monthlyunemploymentdecember2017/