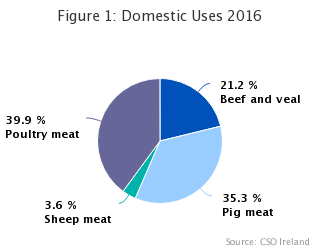 The objective of a supply balance is to reconcile the total supplies of a product with the various uses of that product taking into account changes in stock levels. Supply balance sheets are compiled on the basis of harmonised concepts agreed between the European Union countries.

The total supply of a meat in the country during a year is comprised of meat available from livestock slaughtering and imports. This may be used for export, domestic uses or stocked for future use. Only exports of meat and meat products need to be accounted for, since animals exported live do not constitute part of the supply. Imports of live animals are also not accounted for separately, since the imported animals are slaughtered in the country and then accounted for on supply side as meat.

Supply and use must balance each other, i.e. the following equation must hold in any chosen year

In practice one item in each product balance is always calculated as a balancing residual from equation above, rather than taken directly from the data sources, in order to ensure that the exact balance holds.  The balancing item depends on the type of meat: for beef and veal, sheep and pig meat this is exports, while for poultry the balancing item is domestic uses.

The figures for livestock slaughtering include those carried out at both meat establishments approved by the Department of Agriculture, Food and the Marine (DAFM) and slaughterhouses and meat plants approved by Local Authorities under S.I. 432 of 2009.  Poultry slaughterings are derived from data received from the DAFM.

Variation in stocks is the net difference between movement of product into stocks and out of stocks in the course of the year. The variation in stocks of meat and meat products is usually very small compared to other items of the balance and is assumed to be negligible in this release.

Estimates for domestic uses of beef and veal, sheep and pig meat are provided by Bord Bia. These include mainly human consumption both in households (retail) and services establishments, such as restaurants and bars.  It is assumed that the amount of meat used for other purposes, such as animal feed, and losses are negligible.

The estimates of per capita human consumption are derived by dividing the total domestic uses by the population estimate produced by the CSO.  No account is taken of meat consumed while on overseas and cross-border travel trips.

Self-sufficiency is defined as gross indigenous production expressed as a percentage of domestic uses. Self-sufficiency in excess of 100% for any of the products means that the country is a net exporter of the given product.

All figures in the release are shown in carcass weight equivalent.

For cattle, the carcass weight is defined as the slaughtered animal’s cold body weight after being skinned, bled and eviscerated and after removal of external genitalia, the limbs at the carpus and tarsus, head, tail, kidneys and kidney fats and the udder.

For sheep, the carcass weight is defined as the slaughtered animal’s cold body weight after being skinned, bled and eviscerated and after removal of the head, feet, tail and genital organs including the udder.  Kidneys and kidney fats are included in the carcass.

For pigs, the carcass weight is defined as the slaughtered animal’s cold body weight either whole or divided in half along the mid-line, after being bled and eviscerated and after the removal of the tongue, bristles, hooves, genitalia, flare fat, kidneys and diaphragm.

Scan the QR code below to view this release online or go to
http://www.cso.ie/en/releasesandpublications/er/msb/meatsupplybalance2016/