Large customers accounted for 21% of electricity consumption in 2020 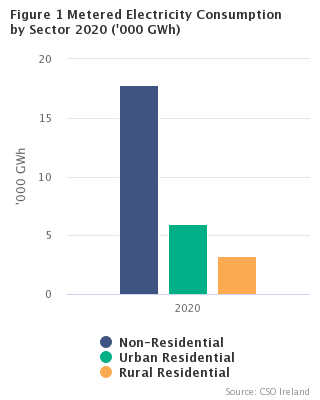 On a quarterly basis, the main seasonal variation was in the residential sector with 29% of consumption in 2020 in the first quarter compared with 22% in the third quarter (see Tables 2A and 2C).

Dublin postal districts had the highest proportion of residential consumption in 2020 with 18.7% (see Table 3B). Cork (12%), Dublin county (6.9%), Galway (5.7%), and Kildare (4.6%) were the next highest. Counties with dwellings using electricity as their main space heating fuel as well as number of meters are likely to be the main underlying factors determining residential demand. Table 8 of the CSO Domestic Building Energy Ratings release classifies dwellings by county and main space heating fuel.

Electricity consumption can be used as an indirect indicator of vacant and holiday dwellings. Around 10% of residential customers consumed less than 1,000 kilowatt hours in 2020 which was well below the median of 3,658 kilowatt hours.

This release contains quarterly metered electricity consumption data for 2015 to 2020. The data were received from the Electricity Supply Board (ESB Networks) for all connections to the mains electricity network.

The CSO extracted the county and Dublin postal district from the address details provided by ESB Networks. The CSO matched the address with other data sources such as the SEAI Building Energy Ratings and GeoDirectory to assign a county or Dublin postal district to any records that were not coded using the ESB address details. In a small number of cases it was not possible to assign a county to a meter. A small number of very large customers have not been classified by county for confidentiality reasons.

The CSO extracted the Dublin postal district from the address files. Where an Eircode was available, the postal district could be extracted directly from the routing key. In other cases, there was uncertainty between some postal districts being derived from the street name. Hence the coding at this level should be regarded as only broadly correct.

The data provided to the CSO covered all customers connected to the mains electricity network. This includes both non-residential and residential customers. Locations such as bus shelters and street lighting were included.

The meter readings data were converted to quarterly consumption estimates by ESB Networks. Meter readings can be actual or estimated. Actual readings can be from a meter reader or from the customer. The data file provided to the CSO did not provide information on whether the consumption in a period was based on an actual or estimated reading. The total electricity consumption figures are broadly consistent with the Commission for Regulation of Utilities reports and with the Sustainable Energy Authority of Ireland energy balances.

Data for all years are subject to revision. The most likely revisions will arise from an adjustment to move non-domestic customers from Distribution Use of System (DUoS) groups 1 and 2 to a non-residential DUoS group. Amendments could also arise from correcting errors in the county coding.

The CSO received the administrative microdata under Section 30 of the Statistics Act, 1993. The CSO received quarterly data for 2015-2020 for all metered electricity customers. Daily data were received for a small number of large customers.

The median can be regarded as typical usage as it is not influenced by outliers in the same way that the mean or average is. The annual median is calculated independently of the quarterly medians, e.g. in Table 5A.

This release will be published on an annual basis.

The data received by the CSO were classified by tariff category (DUoS). DG1 is urban domestic and DG2 is rural domestic. However, small commercial customers (newsagents, farms, etc.) are sometimes included in these categories. Hence the total consumption by the residential sector is an over-estimate. The Large Customers category is a combination of DUoS groups DG8, DG9, DG10 and TCON.

The DUoS is determined by factors such as the type of use, maximum import capacity (MIC), and the nature of the connecting network. A domestic customer premises is defined as any premises whose main purpose is that of a single residence and where the connection agreement is with a private individual with an MIC up to 29,000 voltamperes.

Public lighting connections with loads up to 2,000 voltampere are unmetered. Connections to street kiosks, bus shelters, etc. are unmetered up to the 2kVA load.

Scan the QR code below to view this release online or go to
http://www.cso.ie/en/releasesandpublications/er/mec/meteredelectricityconsumption2020/