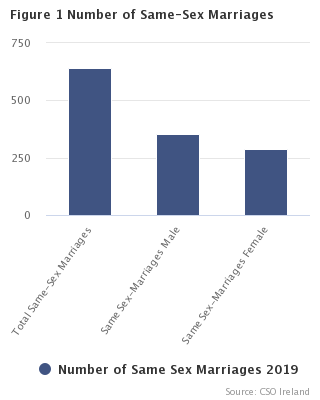 There were 640 same-sex marriages in 2019, of which 353 were male unions and 287 were female unions. See release Infographic

August
The most popular month for all marriages in 2019

Friday and Saturday were the most popular days of the week to get married with 13,783 or 70.1% of opposite-sex marriages occurring on those days.  The least popular day was Sunday when 512 (2.6%) couples wed.  See table 16.

Friday 6th of December was the most popular date for same-sex marriages in 2019 with 9 (1.4%) marriages occurring on this day.

In 2018 (most recent available data) Cyprus had the highest crude (unadjusted) marriage rate of the EU 28 Member States with a rate of 7.8 per 1,000 population.  Luxembourg had the lowest rates, with 3.1 marriages per 1,000 population.  In comparison, in 2018 Ireland had a marriage rate of 4.3 per thousand population and was ranked 18th along with Finland.  (The latest available data for Belgium, France and Germany was 2017 and 2016 was the most recent data available for The United Kingdom). See figure 3.

Groom older than bride in 62.6% of opposite-sex marriages

There were 2,428 opposite-sex marriages involving at least one divorced person in 2019, including 562 marriages where both parties were divorced.  See table 17.

Over 87% of same-sex marriages were first time marriages

Over half (57.8%) of grooms and more than two-fifths (42.5%) of brides in the 'Professional Occupations’ socio-economic group married an individual in the same group.

The socio-economic group with the greatest apparent disparity was the "Skilled Trades Occupations" where 2.6% of grooms married within their own group in comparison to 36.0% of brides doing so.  See table 6 and background notes.

For the numbers of divorces and judicial separations granted in 2018 (the most recent data available) see attached link:  (Courts Service Annual Report 2018).  The section on Family Law contains this information.

Show Table 20 Marriages of opposite-sex couples registered in 2019 classified by age of groom and bride in single years; all marriages

Show Table 21 Marriages of opposite-sex couples registered in 2019 classified by age of groom and bride in single years; first marriages only

These statistics have been compiled from the marriage registration forms of all marriages registered in the Republic of Ireland in 2019.

The release has been prepared by the Central Statistics Office for the Minister for Employment Affairs and Social Protection in accordance with the provisions of Section 2 of the Vital Statistics and Births, Deaths and Marriages Registration Act, 1952.

Where the weekday and month of a marriage are specified in this release, it refers to the date on which the marriage occurred.  Note that some marriages registered in 2019 (and hence included in these statistics) occurred in years before 2019.

Marriages celebrated according to the rites and ceremonies of the Roman Catholic Church, the rites and ceremonies of the Church of Ireland, the forms and disciplines of the Presbyterian Church, the usages of the Methodist Church, the usages of people professing the Jewish religion.  The Spiritualist Union of Ireland and the Humanist Association have been classified under their respective ceremony.  The usages of certain other Religious Bodies have been classified under 'other religious'.  (Tables 1, 13,13A,13B, 14, 15 and 17 refer).

From 1st January 2018 an Amendment of the EU NUTS legislation came into effect.  This reflects the new regional assembly structure and the other changes to the Local Government Act for Tipperary North, Tipperary South,  Limerick City and County, Waterford City and County.  The composition of the new Regions breakdown is outlined below.New NUTS2 and NUTS3 regional Authority areas - January 2018

Scan the QR code below to view this release online or go to
http://www.cso.ie/en/releasesandpublications/er/mar/marriages2019/