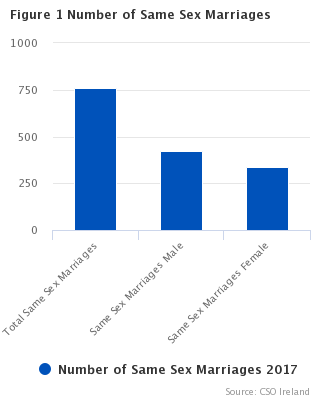 Almost 65% of opposite sex couples have religious marriage ceremonies

Over 69% of same sex couples have civil marriage ceremonies

Friday and Saturday were the most popular days of the week to get married with 14,933 or 70.2% of opposite sex marriages occurring on those days.  The least popular day was Sunday when 491 (2.3%) couples wed.  See table 16.

In 2015 (most recent available data) Lithuania had the highest crude (unadjusted) marriage rate of the EU 28 Member States with a rate of 7.6 per 1,000 population.  Portugal and Slovenia had the lowest rates, with 3.1 marriages per 1,000 population.  In comparison, in 2015 Ireland had a marriage rate of 4.8 per thousand population and was ranked 13th.  (The latest available data for The United Kingdom and Austria was 2013 and 2012 was the latest data available for France).  See figure 3.

Groom older than bride in 63% of opposite sex marriages

Over 87% of opposite sex marriages were first time marriages

There were 2,510 marriages involving at least one divorced person in 2017, including 563 marriages where both parties were divorced.  See table 17.

Over 78% of same sex marriages were first time marriages

Over half (58.1%) of grooms and two-fifths (42.2%) of brides in the 'Professional Occupations’ socio-economic group married an individual in the same group.

The socio-economic group with the greatest apparent disparity was the "Skilled Trades Occupations" where 2.7% of grooms married within their own group in comparison to 43.8% of brides doing so.  See table 6 and background notes.

Number of divorces granted increased by just over 25%

The most recent divorce data available at time of publication is for 2015.  There were 3,289 divorces granted by the Circuit Court and the High Court in 2015.  This was an increase of 660 on the 2014 figure. See table A.

Divorce statistics are compiled by the Courts Service.  For the numbers of divorce applications received in 2016 see link:  Divorce: (Circuit Court 2016)  and (High Court 2016)

Show Table 20 Marriages of opposite sex couples registered in 2017 classified by age of groom and bride in single years; all marriages

Show Table 21 Marriages of opposite sex couples registered in 2017 classified by age of groom and bride in single years; first marriages only

Show Table A Divorce, Judicial Separation and Nullity applications received and granted by the courts in year ending December 2015

These statistics have been compiled from the marriage registration forms of all marriages registered in the Republic of Ireland in 2017.

The release has been prepared by the Central Statistics Office for the Minister for Social Protection in accordance with the provisions of Section 2 of the Vital Statistics and Births, Deaths and Marriages Registration Act, 1952.

Where the weekday and month of a marriage are specified in this release, it refers to the date on which the marriage occurred. Note that some marriages registered in 2017 (and hence included in these statistics) occurred in years before 2017.

Marriages celebrated according to the rites and ceremonies of the Roman Catholic Church, the rites and ceremonies of the Church of Ireland, the forms and disciplines of the Presbyterian Church,  the usages of the Methodist Church, the usages of people professing the Jewish religion, The Spiritualist Union of Ireland and the Humanist Association have been classified under their respective religions.   The usages of certain other Religious Bodies have been classified under 'other religious'.  (Tables 1, 13,13A,13B, 14, 15 and 17 refer).

Scan the QR code below to view this release online or go to
http://www.cso.ie/en/releasesandpublications/er/mar/marriages2017/