The number of cattle slaughtered during the period January to October 2021 decreased by 5.7% 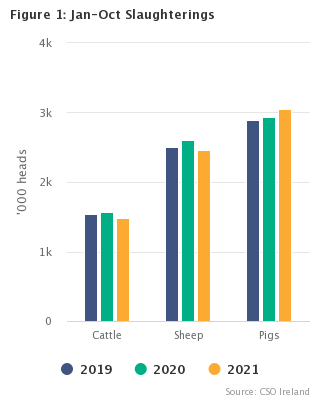 Cattle slaughterings fell by 5.7% during the period January to October 2021 when compared to the corresponding period in 2020. See Table 1 and graph.

A further comparison between January to October 2021 and the same period in 2020 shows that:

An analysis of the data for October 2021 compared to October 2020 shows the following:

This release gives the number and carcass weight of cattle, sheep and pig slaughterings in the Republic of Ireland. The figures include slaughterings at both meat establishments approved by the Department of Agriculture, Food and the Marine (DAFM) and slaughterhouses and meat plants approved by Local Authorities under S.I. 432 of 2009. The collection of monthly slaughtering data for cattle, sheep, and pigs is governed by Regulation (EC) No. 1165/2008.

The carcass weight of cattle, sheep, and pigs slaughtered in premises under Local Authority control corresponds with those applied to DAFM approved plants.

Calf slaughterings are included with cattle.

For cattle, the carcass weight is defined as the weight of the slaughtered animal’s cold body after being skinned, bled and eviscerated and after removal of external genitalia, the limb at the carpus and tarsus, head, tail, kidneys and kidney fats and the udder.

For sheep, the carcass weight is defined as the weight of the slaughtered animal’s cold body after being skinned, bled and eviscerated and after removal of the head, feet, tail and genital organs including the udder. Kidneys and kidney fats are included in the carcass.

For pigs, the carcass weight is defined as the weight of the slaughtered animal’s cold body either whole or divided in half along the mid-line, after being bled and eviscerated and after the removal of the tongue, bristles, hooves, genitalia, flare fat, kidneys and diaphragm.

Comparing CSO data with other sources of slaughtering data

Particular care should always be taken when comparing weekly data and monthly data. Weekly data can straddle different months and indeed years and as a result, can lead to significant differences when compared with monthly data.

Easter falls each year on a Sunday between March 22nd and April 25th, inclusively. The level of sheep slaughterings in March and April each year is greatly influenced by when Easter falls.

Scan the QR code below to view this release online or go to
http://www.cso.ie/en/releasesandpublications/er/ls/livestockslaughteringsoctober2021/