Industrial Production increased by 2.8% in March 2015 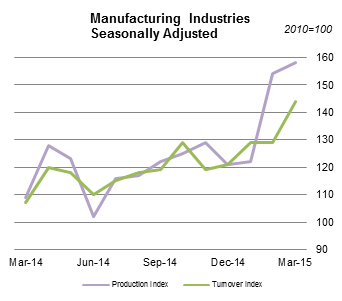 The “Modern” Sector, comprising a number of high-technology and chemical sectors, showed a monthly increase in production for March 2015 of 7.9%.  There was a monthly decrease of 2.7% in the “Traditional” Sector (see table 2).

The monthly industrial inquiry index monitors current trends in the volume of production of industrial local units with three or more persons engaged.  The primary purpose of the index is to measure changes in value added at constant prices.

The monthly index of turnover measures the change in the level of sales each month of industrial products, whether manufactured in the month in question or in previous periods (excluding non-industrial activity where practicable).  The turnover indices outlined in this release are exclusive of VAT.

The response rates for the provisional results are typically 46% in terms of the local units surveyed covering 84% of  the value of production and  82% of the  value of turnover.  The corresponding figures for the final results are 71%, 91% and 90% respectively.  These response rates are based on averages for a 12 months of 2013.  In September 2009 an additional question on response burden showed that respondents took an average of 19 minutes to complete the monthly inquiry form.

The monthly survey which provides data for calculating the indices covers the larger local units which between them account for the bulk of industrial output – in general those which in the base year 2010 had twenty or more persons engaged in NACE 5 to 39.  For certain sectors the threshold of 20 persons engaged is lowered where this is considered necessary to ensure representativeness of the sample or where data for a sector would have to be kept confidential if the 20 persons engaged threshold were applied.  The business activity classifications are based on the Statistical Classification of Economic Activities in the European Community (NACE Rev. 2).

Iindividual production and turnover sub-indices are compiled for each detailed NACE class.  These sub-indices are combined to provide the indices for broader sectoral groupings, using as weights for a sector the gross value added at factor cost for production indices, and turnover in goods produced and industrial services provided to others for turnover indices, for all units in that sector covered in the 2010 Census of Industrial Production (CIP).  Weights and base year are revised every five years.

The production index is compiled using two methods. One method is based on current value data being converted to values at base year prices using suitable Wholesale Price Index (WPI) deflators. Alternatively, the series has been compiled using updated prices from the Prodcom 2010 survey.

Seasonal adjustment is conducted using the direct seasonal adjustment approach.  Under this approach each individual series is independently adjusted, e.g. aggregate series are adjusted without reference to the component series.  Seasonal adjustment models are developed for each series based on unadjusted data spanning from January 2008 to the current period.  These models are then applied to the entire series. Seasonal factors are updated each month.

All industries is comprised of all sectors classified NACE 05 to 35 inclusive. This includes Mining and quarrying NACE 05 to 09, Manufacturing Industries NACE 10 to 33, Electricity, gas, steam and air conditioning supply NACE 35.

Traditional Sector includes All Industries (NACE 05 to 35) excluding “Modern” sector as detailed above.

Indices calculated under the current system (Base year 2010) have been calculated from January 2010. When making comparisons with data produced in previous monthly industrial production and turnover releases it should be noted that:

From January 2010 some companies would have moved NACE from where they were for Base Year 2005. This may have been at the;

In January 2014 a new sample was introduced which would include companies that were not included before or were dropped from the last sample i.e.

The wholesale price indices were revised in September  2013 to include updated weights (base year = 2010). New base year weights were compiled for the Wholesale Price Index using the results of the 2010 Census of Industrial Production (CIP) and the Prodcom Inquiry surveys.  New baseweights were applied to each three digit NACE group on the basis of the Census of Industrial Production and the commodity groups weights were assigned on the basis of the Prodcom Inquiry.  The business activity classifications used in the updated WPI series are based on the Statistical Classification of Economic Activities in the European Community i.e. NACE Rev. 2.  For further information on the updated WPI indices see the CSO publication Wholesale Price Index, Introduction of Updated Series Base Year 2010 = 100 (http://www.cso.ie/en/media/csoie/releasespublications/documents/prices/2010/wpiintro05.pdf)

The individual series have been revised with updated deflators.

Scan the QR code below to view this release online or go to
http://www.cso.ie/en/releasesandpublications/er/ipt/industrialproductionturnovermarch2015/