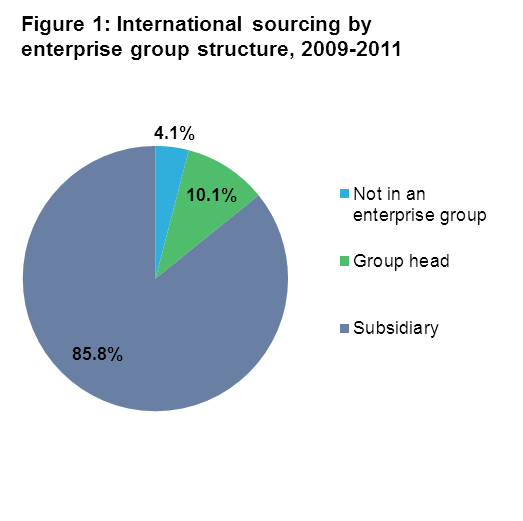 Of those enterprises that engaged in international sourcing between 2009 and 2011, almost 86% were subsidiaries controlled by other enterprises; just over 10% were enterprise group heads; and just over 4% were standalone enterprises. 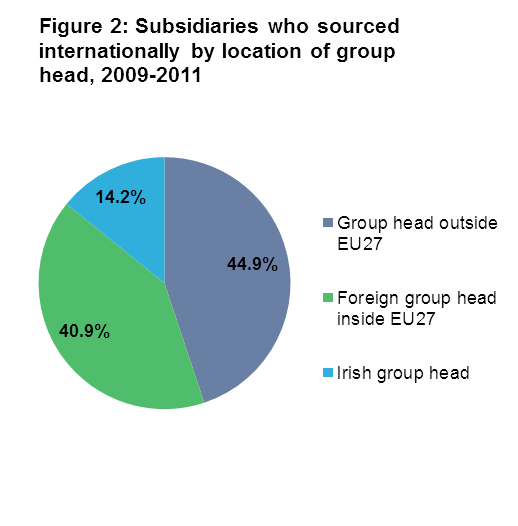 Looking specifically at the subsidiaries who engaged in international sourcing between 2009 and 2011, almost 86% were controlled by group heads outside of Ireland. This consists of almost 45% with a group head outside of the EU27 and almost 41% with a group head inside the EU27.  See Figure 2 and Headline Table.

Therefore, of the 148 enterprises that sourced business functions abroad between 2009 and 2011, 109 enterprises were part of multinational enterprise groups with a foreign group head.  See Headline Table. 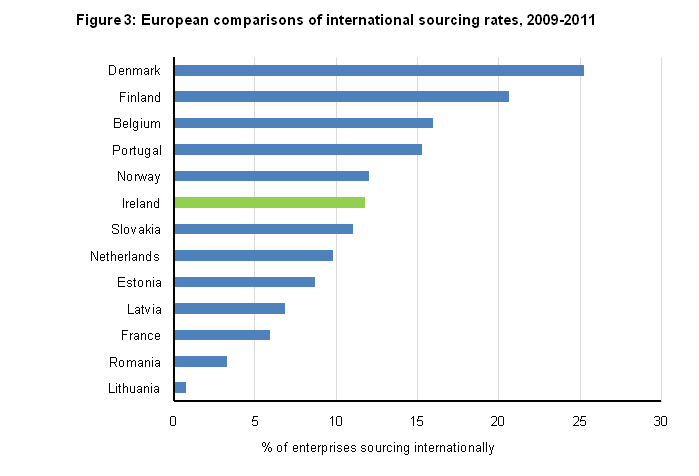 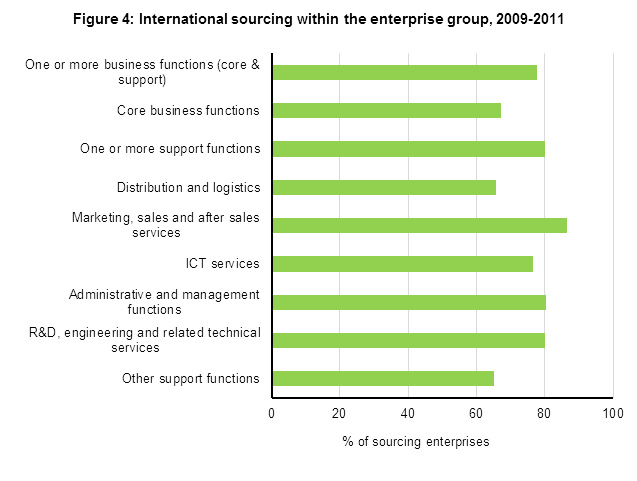 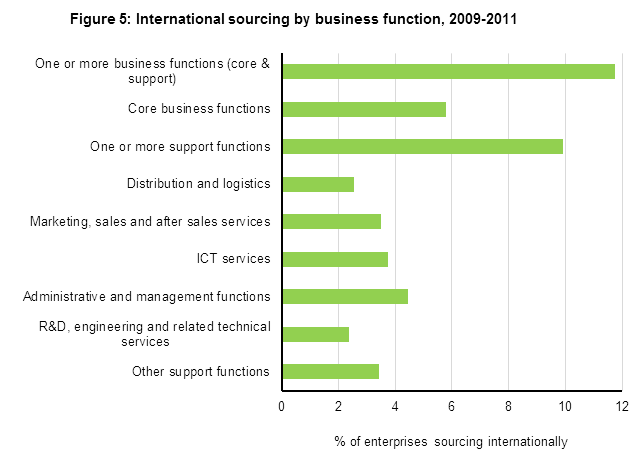 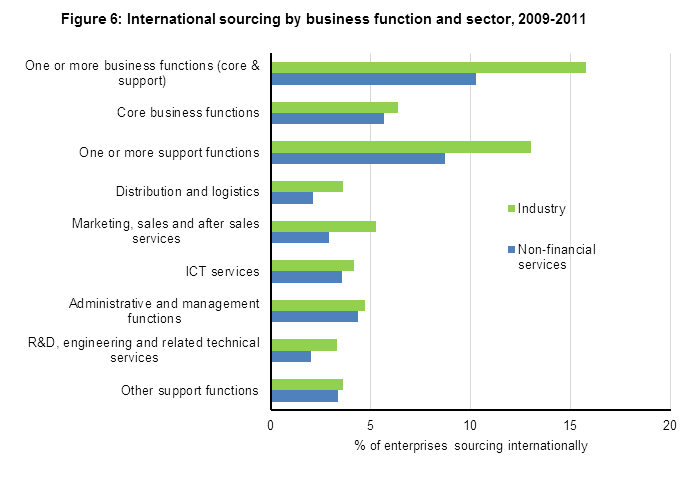 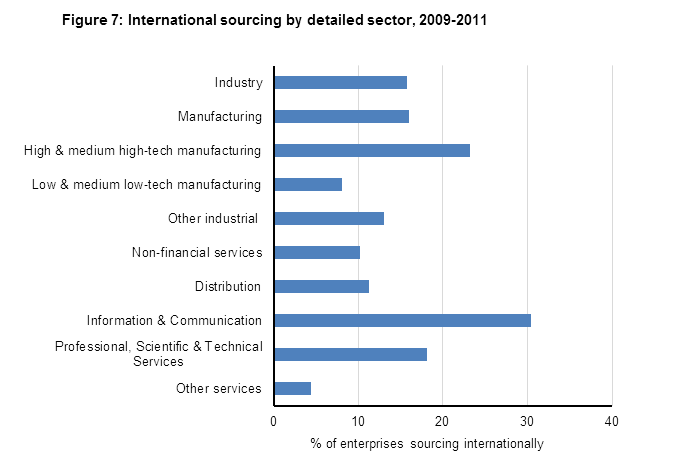 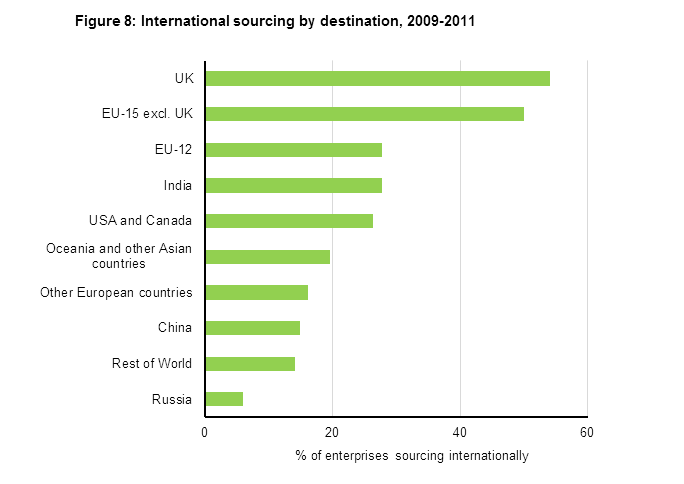 Over 56% of enterprises indicated that a strategic decision taken by the group head was a very important motivation for international sourcing during the period 2009 to 2011.  The majority of Irish enterprises that sourced business functions abroad were subsidiaries within enterprise groups.  The second most cited motivation for international sourcing, at almost 43%, was a reduction of labour costs.  See Figure 9 and Table 5. 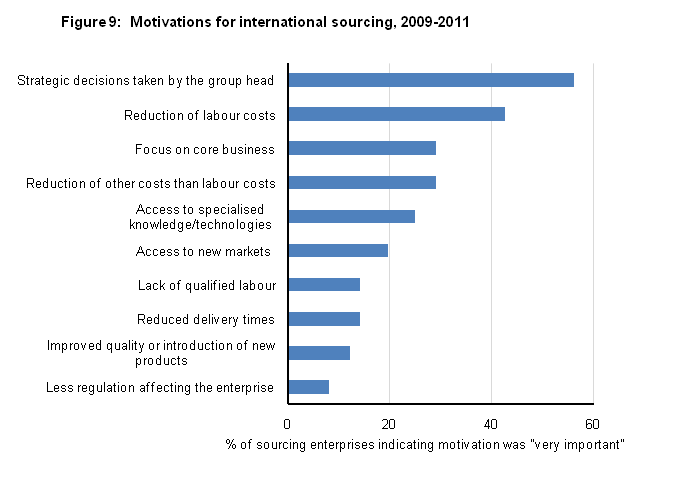 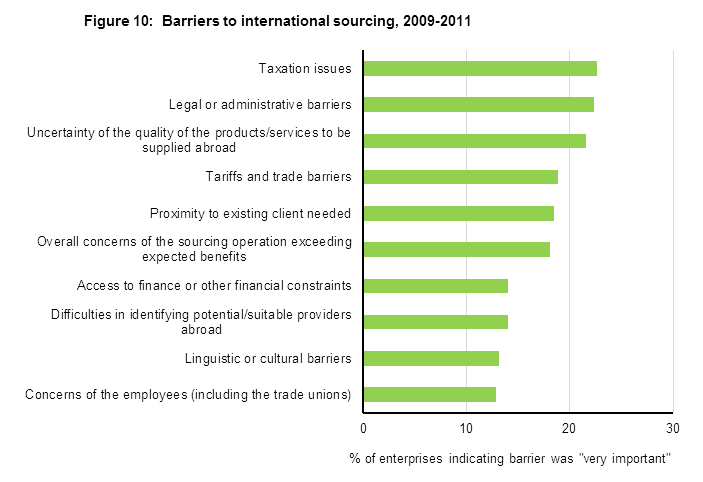 The International Sourcing Survey was carried out between July and December 2012.  It used the CSO eForms which allows respondents to complete the questionnaire via an internet portal.  It was a census of all enterprises in Ireland with 100 or more employees in the Irish business economy (NACE Rev. 2 sectors B to N excluding K).  Enterprises were identified using the CSO Central Business Register. The survey was issued to 1259 enterprises and the overall response rate was 44.3 per cent.  Full details of the response rates for the main sectors are outlined in the table below.

An enterprise group is a set of enterprises controlled by the group head. It is an association of enterprises bound together by legal and/or financial links.  A group of enterprises can have more than one decision-making centre, especially for policy on production, sales and profits.  It may centralise certain aspects of financial management and taxation.  It constitutes an economic entity which is empowered to make choices, particularly concerning the units which it comprises.  The most extensive version of an enterprise group includes affiliates, sister enterprises, the parent enterprise and even joint ventures.

Indirect control means than an enterprise may have control through another affiliate which has control over enterprise A.

A subsidiary is a legal unit which is controlled either directly or indirectly by another legal unit in an enterprise group.

The support business functions are divided into:

The geographical areas used in this survey are as follows:

Scan the QR code below to view this release online or go to
http://www.cso.ie/en/releasesandpublications/er/intss/internationalsourcingsurvey2009-2011/