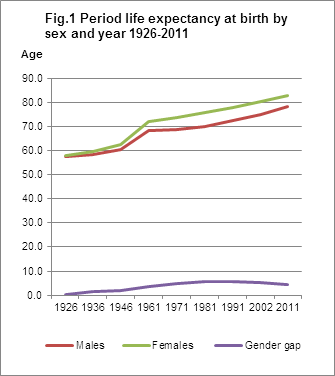 Life expectancy continues to rise for both men and women

The improvements have been as a direct result of decreasing mortality rates, particularly infant mortality rates over the period. While there has been a continual increase in life expectancy for both males and females, with increases occurring between each set of life tables, the greatest rate of improvement occurred in the 20 year period between 1946 and 1966 (8.1 years for males and 10.5 years for females).  Strong gains have also been seen over the last 20 years with increases of 6.1 years for males and 4.9 years for females.  (See table 3).

Life Tables presented here are period life expectancies.  Period expectation of life at a given age for 2010-12 is the average number of years a person would live if he or she experienced age-specific mortality rates for that time period throughout his or her life.  It is therefore not the number of years someone of that age could actually expect to live because death rates are likely to change in the future.

Life Tables were constructed for males and females which are representative of the mortality experience in Ireland in 2011 by using the 2010, 2011 and 2012 estimates and census of population (usually resident) and deaths registered in the three years.  The life table should reflect the normal mortality conditions at about the time of the Census.

Figures from the Male Irish Life Table No. 16 are used in the examples below.  Please note that totals may not add up due to rounding.

Rewriting equation 2 where age x = 10, we see the number of persons surviving to their eleventh birthday equals the number of persons at their tenth birthday multiplied by the probability of their surviving to their eleventh, the remainder having of course died.  Migration is ignored in a life table as the population if closed.

So the probability of dying is the ratio of the number of deaths at exact age x divided by the number of persons surviving at that exact age.  Hence we say the life table is based on ‘current mortality rates only and that no assumptions are made about future changes’.

The fifth column of the life table, Lx equals the number of years survived by the life table cohort between the ages x and x+1, in other words the July population.  Assuming a uniform distribution of deaths over a year of age and using equation 1 we find:

This cannot be used at age 0 as infant deaths are not evenly distributed (i.e. they are non-linear over a year).  For example, in 2011 34% of all infant deaths occurred on their first day of life.

The sixth column of the life table, Tx equals the total number of years which will be survived at age x, lx.  So if Lx is person years, then Tx is cumulated person years , i.e.

The final column of the life table, e0x is the life expectancy in years

e00 represents life expectancy at birth and it is broadly used to express the level of mortality.  Life expectancy is the average number of additional years a person would live if current mortality trends were to continue.  The expectation of life at birth represents the mean length of life of individuals who are subjected since birth to current mortality trends.  Life expectancy is usually compiled on the basis of a life table showing the probability of dying at each age for a given population according to the age specific death rates prevailing in a given period.

Similarly, the probability of a man aged 20 dying before his 50th birthday is calculated as follows:

Scan the QR code below to view this release online or go to
http://www.cso.ie/en/releasesandpublications/er/ilt/irishlifetablesno162010-2012/