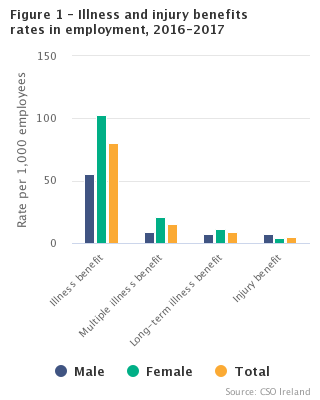 Illness benefit is a scheme provided by the Department of Employment Affairs and Social Protection to support employees if they cannot work in the short term because they are sick or ill. The majority of illness benefit claims are less than 4 weeks in duration with no payment made for the first six days of illness. Only paid claims are included in the following analysis. The duration of Illness Benefit is capped at two years for new entrants since 2009.

working outside of Dublin

with people who described their health as poor

employees who said they had a disability

lowest for people who were managers, senior officials and professionals

below average among higher earners

Illness benefit rate higher among those who reported a disability

The illness benefit rate was higher than average, at 100 per 1,000 employees, for those who were carers providing unpaid assistance. See Table 2.

Illness benefit paid to 82 per 1,000 employees who were commuters

The average rate of illness benefit among employees who commuted to work was 82 per 1,000 employees, slightly higher than the rate of 80 for all employees. See Table 3.

Long-term illness benefit rates were above average among those who departed for work later (after 9.00am), which included those on irregular hours and shift work.

The illness benefit rate was just above the average for all journey times to work which took up to one hour and was lowest for those with a commuting time of more than 1.5 hours. See Figure 4 and Table 3.

Illness benefit recipients more likely to work outside of Dublin

The highest rates of illness benefit with over 100 per 1,000 employees were from the occupations of Caring, Leisure & Other Service Occupations and Process, Plant & Machine Operatives.

The highest rates of people with multiple illness benefit claims were in the occupations of Caring, Leisure & Other Service Occupations and Administrative & Secretarial Occupations.

Information & Communication, Construction, and Professional, Scientific & Technical Activities had the lowest rates at 40 or lower per 1,000 employees.

This release presents statistics on the employment and commuting characteristics of people in receipt of illness benefit and injury benefit over the period April 2016 to April 2017, based on a combination of administrative data sources and Census 2016 data. Analysis is limited to persons who made a claim and also received at least one weekly payment of illness benefit from the Department of Employment Affairs and Social Protection.

Illness benefit is a scheme to support an employee if they cannot work in the short term because they are sick or ill. Details of the illness benefit scheme can be found at the following link; https://www.gov.ie/en/service/ddf6e3-illness-benefit/

The results presented in this release are based on a data-matching exercise of the following administrative data sources:

The linkage and analysis was undertaken by the CSO for statistical purposes in line with the Statistics Act, 1993 and the CSO Data Protocol.

Before using personal administrative data for statistical purposes, the CSO removes all identifying personal information, including the Personal Public Service Number (PPSN). The PPSN is a unique number that enables individuals to access social welfare benefits, personal taxation and other public services in Ireland. The CSO converts the PPSN to a Protected Identifier Key (PIK). The PIK is a unique and non-identifiable number which is internal to the CSO. Using the PIK enables the CSO to link and analyse data for statistical purposes, while protecting the security and confidentiality of an individual's data. PIR, CRS and CSO records were linked using the PIK for this project. All records in the datasets are anonymised and the results are in the form of statistical aggregates which do not identify any individuals.

The PIR is a pseudonymised income register held internally within the CSO. It contains information on income received by individuals relating to employment, self-employment and social transfers. It is derived from administrative holdings held by the Revenue Commissioners and Department of Employment Affairs and Social Protection. Therefore, the PIR provides a near complete picture on individual-level income, for a calendar year.  All linkage is carried out using a PIK assigned on each contributing data source. The PIK is then used to link the pseudonymised data sources together to create the PIR. The PIK protects a person’s identity but also enables linking across data sources and over time. The PIK enables high quality deterministic matching thus significantly reducing/eliminating linkage error. PIR is valid up to 2018.

The COPA is a pseudonymised copy of the Census of Population 2016 dataset held internally within the CSO for analysis purposes. It contains Census attribute information for individuals and households of which 95% of records have a PIK which allows them to be linked to pseudonymised administrative data sources to create new analysis.

Persons of working age (15-64 years), usually resident in the Republic of Ireland, with a principal economic status of 'at work', an employment status of 'employee' and in PRSI Class A, E, H or P (eligible classes for Illness Benefit). When examining injury benefit the analysis is limited to those in PRSI Class A, D or J (eligible classes for injury benefit).

The economic sector classification (NACE) is based on the ‘Statistical Classification of Economic Activities in the European Community, Rev. 2 (2008)'

The Occupation classification used here and in Census 2016, is based on the UK Standard Occupational Classification (SOC), with modifications to reflect Irish labour market conditions.

In Census 2016, the entire population was classified to one of ten specific socio-economic groups (introduced in 1996). In addition, a residual group entitled. “All others gainfully occupied and unknown” was used where sufficient details were not provided. The classification aimed to bring together persons with similar social and economic statuses on the basis of the level of skill or educational attainment acquired. In defining socio-economic group no attempt is made to rank groups in order of socio-economic importance.

The socio-economic groups used in the census are as follows:

A Employers and managers

Z All others gainfully occupied and unknown

Scan the QR code below to view this release online or go to
http://www.cso.ie/en/releasesandpublications/er/ibeca/illnessbenefitsemploymentandcommutinganalysis2016-2017/