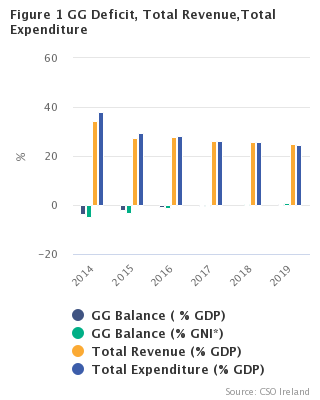 Central government collected €84.6 billion (95.0%) of total revenue in 2019 (Table 4). The remaining 5% was collected by local government through commercial rates (Other taxes on production, D.29), social housing rents (included in Incidental sales and fees, P.131) and Other capital transfers (Table 8).

This release comprises the latest official release by CSO of annual Government Income and Expenditure (GIE) results for 2014 to 2019. The data in this release reflect the Government Finance Statistcis (GFS) 2020 Q1 release of 17 July 2020. The data published in this series are fully consistent with the National Income and Expenditure 2019 publication of 20 July 2020.

Data back to 1995 for all EU Member States are available on Eurostat’s data base, located here.

The National Accounts IT (NAIT) project has enabled Government Accounts Compilation and Outputs (GACO) Division to review, develop and streamline its data sources and compilation methods. In parallel with this ongoing work, a new Revenue data source for the compensation of employees, i.e. pay (ESA code = D.1), has become available to the CSO. Pay As You Earn MODernisation (PMOD) is more comprehensive and timely data from the Revenue Commissioners. This "live" monthly data is processed within the NAIT system. The sub-components of D.1 were revised in this methodological review - Imputed Employer Pension Contributions (D.1221); Imputed Employer Non-Pension Contributions (D.1222) for the whole economy and government employee social contributions. This review has culminated in a robust method for the compilation of the components of D.1 for General Government (2011-2019) that is consistent with estimates of D.1 for other sectors of the economy.

Revisions to Government data since EDP

Expenditure under the 'Early Childhood Care and Education Programme' (ECCE) was reclassified from P.2 to D.632 from 2011 onwards. Other changes to the D.632 figures reflect updated data for local authority housing payments and free fees payments to universities.

Depreciation (P.51c): Revisions have been made to the P.51c data due to the availability of additional data. These revisions are in line with the latest National Income and Expenditure Accounts published on 20 July 2020.

Super dividend: In 2019 Q2 the Exchequer received a super dividend of €1,653 million from the Central Bank of Ireland.

IBRC payment to Exchequer: In 2013 the payment by the Exchequer of €1.1 billion to meet obligations to IBRC deposit holders under the guarentee schemes in operation was treated as the granting of a loan from the Exchequer to IBRC, on the understanding that the Exchequer would be treated as a creditor of IBRC in the liquidation process and that there was a reasonable expectation of repayment. The 2019 repayment of €681.7 million was made in 2019 Q4.

Consultants pay settlement: In June 2018 there was a settlement made following a court process with medical consultants in relation to pay arrears. The backdated payments of €104 million were recorded as D.99 expenditure of central government in Q3 and Q4 2019.

The GDP and GNI* figures used in the current publication are consistent with those published in the latest National Income and Expenditure Accounts 2019 on 20 July 2020.

These data are available on the Eurostat website here

This measure is by definition equal to both Total revenue (TR) less Total expenditure (TE) (Table 1), and Net acquisition of financial assets less Net incurrence of liabilities. In order to respect this accounting identity, a technical adjustment is made to the level of transactions recorded in liability category F32 (long-term debt securities) to eliminate any statistical discrepancy between the two approaches to the calculation of GG deficit/surplus. This adjustment has no impact on Gross debt, Net debt or Net worth.

P.1 Total output of government is equal to market output, own account capital formation, and non-market output (i.e. the sum of D.1+P.2+P51c). The market output referred to in this publication is the imputed market value of social housing rented dwellings.

D.42 Dividends receivable by the owners of share equities. Dividends exclude "super dividends" which arise where the dividend paid is large relative to the recent level of dividends and earnings. Super dividends are recorded as withdrawal of equity (F.5). This arises, for example, in the case of dividends paid by the Central Bank.

Scan the QR code below to view this release online or go to
http://www.cso.ie/en/releasesandpublications/er/giea/governmentincomeandexpenditurejuly2020/