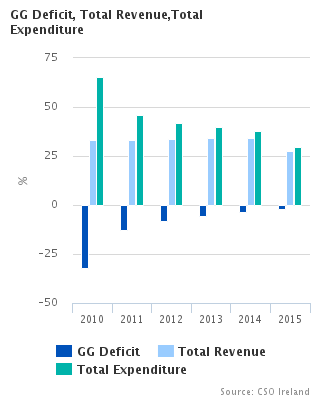 The factors driving growth in government revenue for 2015 were primarily increases in tax and social contribution revenues partially offset by reductions to investment income. Some €4.3 billion was raised in additional taxes in 2015 comprising €3 billion of direct taxes and €1.3 billion of indirect taxes.  The increase in expenditure is mainly due to a once off capital injection expenditure which arose when the government converted part of its holdings in preference shares in AIB to ordinary shares in late 2015. The conversion of these shares is classified as expenditure of government. Further details are available in the background notes to this release.

In 2015, Central Government collected €67 billion, or 95%, of total revenue in 2015. The balance was generated by local government in the form of commercial rates, social housing rents and other transfers.

The government deficit figure for 2015 has been revised since first estimates were published in April from -€4.9 billion to -€4.6 billion. This revision is mainly due to methodological or technical changes to the calculation of compensation of employees and financial intermediation services indirectly measured (FISIM) together with the availability of further data from audited accounts. Combined with the GDP revision, the deficit now stands at 1.8% of GDP for 2015.

This release comprises the latest official publication by CSO of annual Government Finance Statistics results for years 2010 to 2015.  The results for 2015 are provisional estimates and replace the data published as part of the Excessive Deficit Procedure notification on 20 April 2016.

The tables provide detailed revenue and expenditure data for General Government and its two subsectors, namely Central and Local Government. This allows the user to decompose the data to subsector level. A full time series of these data back to 1995 are available on Eurostat’s data base, located at the following link:

Note: These tables replace tables 19, 20 and 21 of the annual National Income and Expenditure publication.

The full suite of government finance statistics tables are also available on the CSO’s website by following the link:

In Quarter 1 2015 the Ireland Strategic Investment Fund transferred €1,634 million to the exchequer. These funds related to the disposal of its preference share holding in Bank of Ireland.

In Quarter 2 2015 Permanent TSB (PTSB) repurchased contingent capital notes issued in 2011, for which the State received €410.5 million.  At around the same time the State sold shares which it held in PTSB at a value of €97 million.  The proceeds of both transactions were recorded in the Exchequer statement.

In Quarter 4 2015 the Ireland Strategic Investment Fund redeemed part of its preference shares in AIB for the sum of €1,700 million.  At the same time the balance of its preference shares were converted to ordinary shares, and the promissory note issued to EBS in 2010 was paid off in full.  The net proceeds of these transactions were recorded in the December Exchequer Statement.

For National Accounts purposes the net inflows to the Exchequer arising from all of the above transactions are not treated as revenue as they are simply the exchange of one asset (equity or securities) for cash or another form of financial asset.  Therefore they have no impact on the general government deficit.  The balance sheet of government shows changes in the relevant instrument categories resulting from these transactions.

The conversion of the preference shares to ordinary shares has been determined to be a capital transfer (expenditure) rather than a reinvestment of capital. This determination was arrived at by Eurostat during the April 2016 EDP clarification process based on AIB losses incurred since the last capital injection was made in 2012 and on the uncertainty of a return on the investment when compared to the guaranteed return on the preference shares previously held.

In Quarter 3 2015 the amount of €423 million was transferred from the Exchequer to local authorities to allow them redeem loans from the Housing Finance Agency related to water services assets.  The assets in question had transferred to Irish Water while the legal title to the loans remained with the local authorities.  This payment was treated as a capital transfer to Local Government from Central Government, resulting in an improvement of the Local Government balance for 2015 and a corresponding worsening of the Central Government balance, resulting in a zero impact at the General Government level as a result of this transaction. A further amount of approximately €147m in loans related to water services assets are also due for repayment by the Minister.

Estimates of the General Government deficit for years 2009 to 2015 have been revised since April 2016. The changes indicate an improvement in the deficit of €300 million for 2015. This is mainly the result of the availability of further data from audited accounts, as well as methodological and data source changes in the estimation of financial intermediation services indirectly measured (FISIM) and Compensation of Employees.

The GDP figures used in the current publication are consistent with those published in the National Income and Expenditure 2015 and the latest Quarterly National Accounts publication.

The CSO’s Register of Public Sector bodies is updated twice a year to coincide with the submission of government deficit and debt figures to Eurostat under the Excessive Deficit Procedure. It reflects any changes in the composition of the government sector since the previous update.

Copies of documents relating to classification decisions can be seen at:

A detailed explanation of the application of these rules and the most up-to-date list of public sector bodies (including General Government bodies) for Ireland is also shown at this link.

D.1      Compensation of employees – the total remuneration of Government Employees

D.3      Subsidies (payable) - current unrequited payments which General Government or the institutions of the European Union make to resident  producers, with the objective of influencing their levels of production, their prices or the remuneration of the factors of production

D.42    Dividends receivable by the owners of share equities. Dividends exclude "super dividends" which arise where the dividend paid is large relative to the recent level of dividends and earnings. Super dividends are recorded as withdrawal of equity (F.5). This arises, for example, in the case of dividends paid by the central bank in 2015.

D.5      Current taxes on income, wealth, etc, (payable)  - all compulsory, unrequited payments, in cash or in kind, levied periodically by General Government and by the rest of the world on the income and wealth of units in the economy, and some periodic taxes which are assessed neither on income nor wealth

Scan the QR code below to view this release online or go to
http://www.cso.ie/en/releasesandpublications/er/giea/governmentincomeandexpenditurejuly2016/