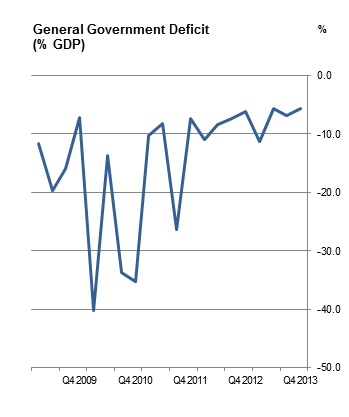 Government revenue for the period at €16,376 million was higher than Q4 2012 revenue of €15,990 due to increased revenue from taxes, social contributions and investment income offset by decreases in other revenue.  Government expenditure also increased but by less than the increase in revenue (Table 1).

The figures in this release comprise the first official publication by CSO of the annual Government Finance Statistics results for the year 2013.  These figures are compiled in accordance with the ESA95 system of accounts, as used in all member states of the European Union.

Because audited accounts for many government bodies become available between April and October, the data for 2013 are provisional.

The data published in this series are consistent with the General Government Deficit and Debt levels reported to Eurostat at end-March and end-September under the EU regulation governing the Excessive Deficit Procedure.   Consequently they may not always be fully aligned with the National Income and Expenditure and related publications such as the Institutional Sector Accounts.

During the most recent EDP notification process, Eurostat ruled in favour of CSO’s assessment that the receipt by government, in May 2013, of ordinary shares in settlement of a €280 million annual dividend receivable from a majority publicly-owned financial institution, be recorded as an equity acquisition of Government.  In earlier publications, for prudential reasons and in accordance with the treatment of corresponding payments in earlier years, this had been treated as a deficit-worsening capital transfer, pending the availability of full-year 2013 results for the institution.  The recent decision has resulted in a restatement of the deficit for Quarter 2 of 2013 (first published in October 2013) in the current publication.

Other changes since the previous publication are as a result of updated data becoming available.

The GDP figures used in the current publication are consistent with those published in the Quarterly National Accounts Release that was published on 13 March 2014.  This has some effect on the calculation of the percentages shown in this release when compared to previous versions.

The estimated pension liability of government (the accrued liability in respect of Public Service occupational pensions) is a contingent liability of government and does not form part of the ESA accounts of general government.  It is shown in this release as a memorandum item.  The value shown for years 2009-2011 of €116 billion was calculated by the Comptroller and Auditor General.    The value of this liability is reduced by €18 billion to €98 billion with effect from 2012. This follows an actuarial valuation carried out by the Department of Public Service and Reform.   The main reasons for the reduction were the pay and pension cuts since 2009 and the freeze in pay and pension rates until after the Haddington Road Agreement.  Details on this updated estimate can be accessed at: http://www.per.gov.ie/public-service-pensions-accrued-liability/.

Detailed statistics on Government revenue and expenditure are also provided to Eurostat under the ESA95 transmission programme.  For annual data the main tables reported are:

General Government Deficit/Surplus (GG Deficit) is the standard European measure of the fiscal balance, which is used to monitor compliance with the Stability and Growth Pact.  It is the difference between the revenue and the expenditure of the general government sector. The government deficit data related to the EDP (EDP B.9) differs from the deficit according to ESA95 (B.9) in the treatment of interest relating to swaps and forward rate agreements.  The measure EDP B.9 is shown as the headline item in this release, while the ESA95 B.9 can be seen in Table 1.

Net Lending/Net Borrowing, that is, the GG Deficit excluding flows on interest swap instruments, is by definition equal to both Total Revenue less Total Expenditure, and Net Acquisition of Financial Assets less Net Incurrence of Liabilities. In order to respect this accounting identity, a technical adjustment is made to the level of transactions recorded in liability category F332 (long-term securities other than shares) to eliminate any statistical discrepancy between the two approaches to the calculation of Net Lending/Net Borrowing  This adjustment has no impact on Net Worth, gross or net debt.

‘Debt liabilities’ are defined as the ESA categories AF.2 (Currency and deposits), AF.33 (Securities other than shares, excluding financial derivatives), and AF.4 (loans).

excluded from the total GG Debt.

General Government Net Debt is a measure produced nationally, by subtracting from the GG Gross Debt figure the value of the financial assets corresponding to the categories of financial liabilities which comprise GG Gross Debt.

General Government Net Worth is calculated as the sum of financial and non-financial assets of General Government less financial liabilities.  This measure is currently published by relatively few countries.  CSO introduced this measure on an experimental basis to our GFS publication at the outset but would note that this figure is still under development and may be revised in the future.

ESA 95 codes and an explanation of each are shown below for the main components of Government revenue and expenditure as well as for types of financial flows. More detailed codes and technical definitions can be seen in the ESA 95 manual available at http://circa.europa.eu/irc/dsis/nfaccount/info/data/esa95/en/esa95en.htm.

P.51     Gross fixed capital formation - acquisitions, less disposals, of fixed assets during a given period plus certain additions to the value of non-produced assets realised by productive activity. Fixed assets are tangible or intangible assets produced as outputs from processes of production that are themselves used repeatedly, or continuously, in processes of production for more than one year

D.3      Subsidies (payable) - current unrequited payments which general government or the Institutions of the European Union make to resident  producers, with the objective of influencing their levels of production, their prices or the remuneration of the factors of production

D.6      Social contributions - transfers to households, in cash or in kind, intended to relieve them from the financial burden of a number of risks or needs, made through collectively organised schemes, or outside such schemes by government and non-profit institutions. These include payments from general government to producers which individually benefit households and which are made in the context of social risks or needs

D.631  Social transfers in kind, via market producers - can be subdivided into those where beneficiary households actually purchase the goods and services themselves and are then reimbursed, and those where the relevant services are provided directly to the beneficiaries

D.9      Capital transfers - involve the acquisition or disposal of an asset, or assets, by at least one of the parties to the transaction.

F.62 - Prepayments of insurance premiums and reserves for outstanding claims

Scan the QR code below to view this release online or go to
http://www.cso.ie/en/releasesandpublications/er/gfsq/governmentfinancestatisticsquarter42013/