Government deficit of €2.8 billion in the first nine months of 2018 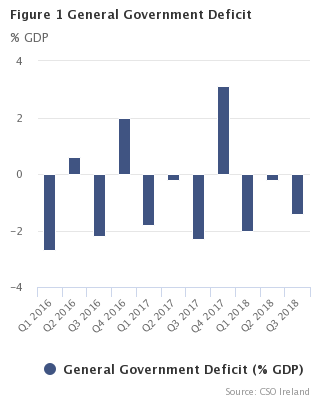 This release comprises the latest official publication by CSO of quarterly Government Finance Statistics (GFS) for the period Q1 2015 to Q3 2018.

Pre-2018 data in this series are consistent with the General Government Deficit and Debt levels reported at end-September 2018 under the EU regulation governing the Excessive Deficit Procedure (EDP). Consequently, they may not always be fully aligned with the National Income and Expenditure and related publications such as the Institutional Sector Accounts. National accounts are compiled in the EU according to the European System of National Accounts framework - ESA2010.

The calculation methods for quarterly GFS are similar to those used in deriving the annual GFS. As some of the available sources are of lesser reliability than those used for annual GFS, the quarterly estimates are subject to a greater margin of error than the annual figures.

The full suite of GFS tables are available on the CSO website here.

As of March 2018, 14 Approved Housing Bodies (AHBs) have been reclassified to the local government sub-sector (S.1313) from the Non-Profit Institution Serving Households Sector (S.15).  In addition, the housing activities of another non-profit organisation have been re-routed to the local government sub-sector.  Details on the reclassification can be found here.

At end Q3 2018 the market value of the State's investment assets (F.5 - Equity and Investment Fund Shares) stood at €38.7 billion. This represented a fall in value from Q2 2018 of €1.6 billion that was almost entirely accounted for by holding losses in equity assets.

Transactions of note in the balance sheet

There were large transactions in F.8 assets and liabilities in Q3 2018 of +€10.2 billion and +€9.7 billion respectively. In ESA terms, F.8 corresponds to other accounts receivable or payable. These assets and liabilities are created in situations where there is a timing difference between the underlying transactions and the corresponding payments.

The GDP figures used in the current publication are consistent with those published in the latest National Income and Expenditure Accounts and the Quarterly National Accounts published on 13 Dec 2018.

EU Member States are required to report government deficit/surplus and debt data biannually under the EDP - before 1 April and 1 October in year N, for years N-4 to N-1 calendar years, as well as a forecast for the current year.  The data are reported in harmonised tables, which provide a consistent framework for the presentation of this data by Member States. The tables provide a structure for linking national budgetary aggregates with government deficit and debt.

These data are available on the Eurostat website here.

This measure is by definition equal to both Total revenue (TR) less Total expenditure (TE), and Net acquisition of financial assets less Net incurrence of liabilities (Tables 1 and 5).  In order to respect this accounting identity, a technical adjustment is made to the level of transactions recorded in liability category F32 (long-term debt securities) to eliminate any statistical discrepancy between the two approaches to the calculation of GG deficit/surplus. This adjustment has no impact on Gross debt, Net debt or Net worth.

‘Nominal value’ is defined in the governing regulation as face value.  If debt is sold at a discount, it is the undiscounted value of the instrument, rather than the amount actually received, that is shown in the GG debt. In other statistical contexts, ‘nominal value’ means face value plus any interest accrued but not paid; however, such interest is excluded from GG Debt by definition.

Detailed codes and technical definitions can be seen in the ESA 2010 manual here.

P.51g   Gross fixed capital formation - acquisitions, less disposals, of fixed assets during a given period plus certain additions to the value of non-produced assets realised by productive activity. Fixed assets are tangible or intangible assets produced as outputs from processes of production that are themselves used repeatedly, or continuously, in processes of production for more than one year.

D.5      Current taxes on income, wealth, etc., (payable) - all compulsory, unrequited payments, in cash or in kind, levied periodically by general government and by the rest of the world on the income and wealth of units in the economy, and some periodic taxes which are assessed neither on income nor wealth.

P.1       Total output of government is equal to market output, own account capital formation, and non-market output (i.e. the sum of D.1+P.2+P51c). The market output referred to in this publication is the imputed market value of social housing rented dwellings. See Table 3.

Scan the QR code below to view this release online or go to
http://www.cso.ie/en/releasesandpublications/er/gfsq/governmentfinancestatisticsquarter32018/